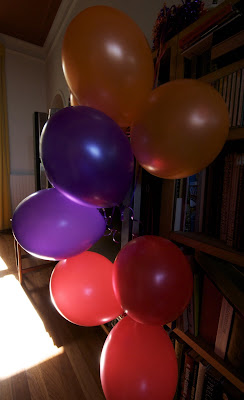 A busy week, wedding anniversary 26th, Julie’s retirement and her birthday. Emotions on roller-coaster all week but we got through it unscathed. For the retirement we threw a party with finger buffet for fifty + which I did with one of Julie’s cousins, we did not want the standard saturated fat deep fried things which usually appear, just enough left for light snack later that evening!

She has been a very popular person at her work where she has been for over 32 years and they collected double what anyone else had ever got for a present, Her colleagues had commissioned a craft made necklace similar to one she had once admired but she had shown interest in an amber necklace from Poland some time before and put her name on it and thought she would be paying for that one herself, she got both!

After all the of the big party we had a quiet Thai lunch with a few cousins and close neighbours then a lazy afternoon when we all came back for cake out in the glasshouse out of the wind. Plans started to be made by all present on how to spend all this new free time. First priority is to stop eating cake!

Since the mortgage was paid up ten years ago we have managed fairly comfortably and gained a few pounds but now we will have to be a lot more careful with the expenses again, first saving will be on food! We aim to try and loose some excess and gain some fitness. This will be harder for Julie with her health condition, my incentive is to lose the belly which seems to be part of fat redistribution! Watch this space.

The buffet was finished for delivery ten minutes ahead of schedule, not a lot of time to get changed for the party and I was driving to the venue before I realised that I has not attended to my face, In fact I had not been near it for over a week. I could feel some slight prickles as my finger slid over my lip and in my imagination they were huge but too late. Returning home I got out the magnifying mirror to find a few fine hairs almost invisible with normal eyesight! Even better than that since I had not shaved for two weeks there was now a soft fuzz of fine velus hair catching the light! I had completely forgotten that this was the dream ending of these years of hair removal treatments to look absolutely natural, a heart racing damp eye moment. Still a few odd stragglers to catch but essentially job done, I am going to miss Aly and her girls but the money has run out and I would have had to stop soon anyway.

The epilator on arms and legs is so much better than shaving and so easy after the first major harvesting, life transformed so cheaply why did nobody tell me this before?