Back home again. Strangely I have never felt homesickness about leaving my parental home mainly because I felt driven out even though in their eyes my parents thought they had given me a good home. Physical comfort but emotional desert and unbreathable air! When I do feel home sickness is when I leave this little corner of France so back home again is absolutely correct!

A strange absence of vehicles greeted us in the parking but the next generation appears to be nocturnal especially in the hot summer months so we did not think too much about it. There was to be a four day life coaching course running in the restaurant for the last days of our stay so we have had to leave the luxury of the old granny flat with en-suite facilities and have to use L’s room which was an absolute tip when we left for Portugal. He just camps here between seasonal jobs and even then often just stays out especially when his girl comes down to the coast for her weekend job, someone is having some fun. By some miracle the room was reasonably useable and we were so tired we hardly noticed at first anyway. Fell asleep is the best and correct description! Our sacrifice of the room for this long weekend paid for the tickets to Portugal!

We had to be fairly self-sufficient for these last days since Y would have to be around much of the time to organise the B and B guests and extra help for the quicker than normal lunches. Naturally they had broken one of the vehicles and it was away in hospital already, L had gone for a sleepover! He would not be back with the van till his turn to help out in the evening. We dare not take Sophia’s 4x4 until it was sure that it was not needed. A lazy start suited us, I finished the child’s high chair with a final full coat of paint then read till lunch, scraps arrived from the course lunch before we could even think what we were going to do.

Not wanting to hang around the house for four days we did eventually get wheels and made trips out. We made the long hot climb which before had been shaded, up to the Marine Memorial Chapel, there had been an unexpected diversion through the pines and vines on the hills of La Clape near Narbonne probably due to a bike race. We rediscovered the small coastal villages which we had not seen for years. Much has changed but 75 kilometers of coastal walks have been created along this ancient coastline. We were diverted to Gruissan, once all built on stilts and the setting for a once popular film “ Betty Blue “. On the Saturday modern life nearly stranded us, France still tries to have weekends so petrol has to be bought by confronting self service machines which speak strange tech French and in our case spat back all our cards which came into force on the first of the month even though we had called before leaving to say where and when we would be using the darn things, This happened to us once before when we drove deep into the country to a two Michelin star restaurant and I was to pay for this outrageous treat, all I took was reading specs and the card and it failed to work! We had enough fuel to get back home and borrow another card, I can hardly remember the numbers for my own cards but now have Y’s number etched into my skull and it will not fade.

The weather was a bit strange, still in the high twenties but feeling less with the lower sun this time of year, the wind dropped with calm air over most of southern France. When there was wind the sea was calm when it was calm there would often be rough seas but still great temperatures for a swim. Julie, who these days does not like the extra trek to the naturist beach, decided the weather was ideal, there was a cloudless blue sky from horizon to horizon, so we managed to spend one whole afternoon swimming and reading and me taking long walks. I have started using the iPod on some of my beach walks, set on random the pace and cadence changes, sometimes with the right tune you can work up a real catwalk hip swinging strut which brings out a real beaming smile!

Food was stocked up for easy light vegetarian meals with artichokes, French beans to eat with vinaigrette and chicory which we pay nearly a euro per piece but there cost little more for a kilo bag! The evenings at the restaurant were not full at this end of the season so we got several meals as a treat, how else can we honestly recommend the place to anyone? A change from our all veg meals in the house! When we had the lobster the battery was being charged for the camera!! Veal kidneys had been ordered for me as a special treat, C must keep a list of my requests, we got tongue and sweetbreads on the last trip. I get to slip my iPod onto the dock and pick my own music selection.

Before we knew it the long awaited holiday was over. Just as well with the money all gone and the comatose credit cards. With the circumstances we had nothing to carry off home except the tin of cassoulet which we had given up to eat the lobster, it was the perfect gift for our neighbours. Scottish friends had just phoned to say that they were on the Atlantic coast but would visit if there was a bed free, they had collected rash purchases for us before like a marble topped cast iron table which would be a bit tricky by air, they will bring back some wine for us. We made the decision to abandon most of the mid season clothes we had taken and not needed so that in future we only need hand luggage and can save hours of checking in and can visit at short notice at any time of year.

I did get transport on the Friday so went for a couple of hours on the beach by myself. I switched my super cheap mobile on to keep an eye on the time, on holiday I need to know the time! The thing burst into life all excited, a call had been made on it from Spain and now someone thinks I am going to make expensive calls in France. At least I now know I can be rescued from the beach if the car gives trouble! Still quite relaxed about my date, I think. I am in a bit of a mess after my swim having forgotten that my hair was still braided up from the trip and getting more than a little ratty and sticky with all the salt so I had to go home to get cleaned up, all vestiges of the soaking in Chanel from the duty free will be long gone! I wish I had been able to totally relax and enjoy the touch of a new human being. This was not the quick hug and kiss I am used to but close personal attention which I have not experienced for countless years. There was some pop playing in the background, when I was able to name the singer as Lily Allen we knew we were on the same wavelength, we may be both getting on a bit but still young at heart! My French is embarrassingly bad considering how many times I have visited but I have spent too much time giving the kids intensive training in English which they now appreciate. Any how we were getting along just fine, one to one is not so bad if nobody else is listening in. When I was asked to turn round and bend forward it was done before I realised that I had understood! He says he does not get to do this very often but it gives him great pleasure, I got that too! We are going to meet again, he was pleased when I told him how often we may be visiting France now there are no work restrictions. I was not really sure about this but it went much better than I could have ever imagined. Perhaps we can come back for the almond blossom in February / March, must work on this. 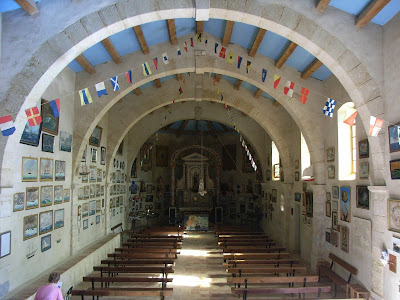