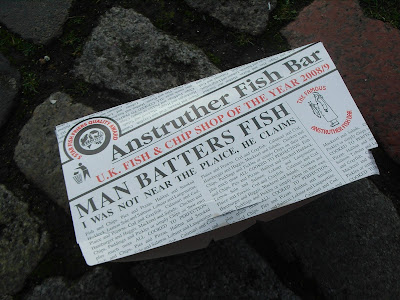 House guests for a week. Four people just cannot make plans! I gave the chef all my money, (£30 $45 per walk round) and the golf clubs found in the attic in the tattiest golf bag on the planet and left him at the local golf club where he played his last round of golf about 15 years ago! They will probably be talking about this crazy Frenchman who turned up with clubs from a museum, lost a ball on each of the first three holes, lucky they had not just fallen out of the holes in the bag! and by the end of the round he was getting respectable scores again. When it was starting to get dark and rain I set off to see what had happened to him, at least he had half a days pleasure for the money and was grinning like a cat after a bowl of cream!

Next day I promised him that a fish van would arrive at the door, this is his passion. We waited in the increasing gloom until it started to rain, Billy did not turn up. Just our luck he had a broken clutch an was out of action for the rest of the day. We drove south out of the rain to the south coast of Fife with small fishing villages and the best fish and chip in the country on the harbour where we sat OUT to eat in the sunshine. Our remains were pooled and the others threw them at the seagulls as the half hour to load video shows.

Finally found some fish and was shown how to make a wonderful soufflé like terrine which we have just had for today's party. Y & C have now caught up with most of their old friends and can soon continue on their holiday to Malta and some real sun and i shall be able to go back to wearing my skirts again. The two sisters have been chatting and Y wondered if I was gay, just exploring the feminine side of my nature she was told. There are enough clues out there for her, when we were out for the fish and chips I needed a pee and was ushered into the facilities, without paying, with a cheery in you go luv, so clean and tidy, OH! of course these are the ladies facilities. You should have seen her face! moments of joy.
Posted by Caroline at 22:57