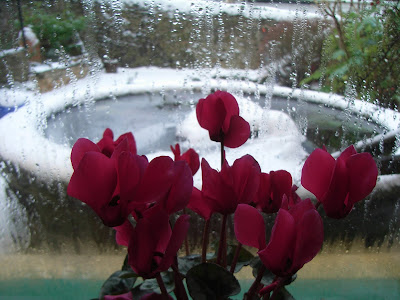 Glad I had to do the airport run yesterday! The country is a mess and I would not have been able to have even got out to the road with all the extra snow, then loads of roads have been blocked. The airline I use to fly to France for my winter trips crashed one of it’s planes off the end of the runway just missing a major road! The runway was built there because it is one of the most frost free places in the country!

Now have so much snow it is possible to walk about again the ice is buried!

Anji asked how I got my first job, perhaps I did not write about it before in the blog so here goes.

My mother had a part time job working in a large department store which emptied it’s basement for ten weeks before Christmas each year to fill it again with toys and a grotto for kids to see Santa. I was fifteen and my Christmas present that year was a reel to reel tape recorder which my mother bless her thought would help me with my school work. Little did she know how much I hate the sound of my voice, no prizes given for saying why! She organised the purchase which was outrageously expensive then came home to tell me that she had organised a Saturday job foe ten weeks with full time when the term ended before Christmas, this was to help pay for my “present”. I turned up as instructed and was told that my job was to load those wishing to see Santa into seats on a sleigh ride then run the system until it was their turn to be ushered into Santa's presence by one of his “Bunny Girls”! Don’t ask, well I will tell you Santa was off the scale lecherous!

It was an interesting job, you got to see everybody’s look of horror when they entered the uv light and all their dandruff flakes glowed. The kid’s reactions were great to watch especially when the landscape curtains which rolled each side of the sleigh got jammed and required a quick reaction to jerk free. If things were quiet they could be there for ages to keep me company but as things got busy the queue would start out in the street then wind round the shop and down into the basement then it was a personal challenge to get everyone in get a ride and out without feeling cheated and without leaving Santa with time to be interfering with the Bunny Girls. The cheapskates only bought one 7” vinyl record for the whole season! At the end it was completely worn out and embarrassing to have playing. Late on Christmas eve Santa closed his grotto and in the last hour before closing many of the workers came to party on the sleigh joined by the Bunny Girls who had finally escaped. Sad unloved creature that I was I set everything going including their own new pop record and left them to it, my work was done.

Some time in the mid eighties I was bought a smart cashmere and silk pullover which has been my going out smart top ever since! Obviously I have had other clothes since, even I have to keep warm. With my hot flushes I felt I needed something open at the front and for the past year have been scouring sales for such a thing and miracle of miracles after missing so many it finally arrived. AN alpaca cotton and silk kimono style jacket, not my usual bright colours but black and teal. The reaction from Julie was quite interesting as the garment came out of it’s packaging. There was a tinge of jealousy mixed with the emotion of seeing an element of Caroline come alive before her eyes. Suddenly she was concerned that I should have a fitting layer beneath and what else was I gong to wear with it? I assembled the outfit and did the fashion parade, never been asked this before, then came the seal of approval followed by “do you want to borrow one of my necklaces?!”

Julie is quite intrigued by Caroline now, she sees her all of the time and much of the time overtly wearing skirts. I have never said to her “hey this is Caroline” but she has made slight hints about a name and I have asked what names she thought appropriate for a creature of my age but that was nearly two months ago. Just the other day she suddenly said that she felt that she “should” have a name for Caroline! I am still waiting for the list.

Our evolution though slow is sure as my old self fades away and Caroline blooms.

Christmas seems to be getting nearer, the new plastic cards have arrived but oh dear too much snow! At our age and probably for those younger, presents which can be consumed make a lot of sense so we shall have to wrap up a lot of chocolate tomorrow! No chance of getting the tree out of the garden now so I guess I shall seek out a fake which I scrounged from someone about to throw it away! That year we had complements on the beauty of the tree! Pine essence from the sauna helped the illusion so I shall try that again.

Wishing all my readers a Happy Christmas or whatever you are celebrating!