A visitor during the big freeze sent me a link to a site selling grippers the fit on shoes to aid walking on snow and ice. I suspect that now that the money has been spent on these things we shall not be bothered with the stuff ever again. Certainly anything threatened by the meteo fails to reach us at the last moment but it falls on the road to Glasgow! To get our moneys worth they are going to hang on the wall as an artwork so that they can be found if we are unlucky enough to get more bad weather, no doubt by then the rubber will have perished and they will not work. Not in optimistic mood after a fraught day. 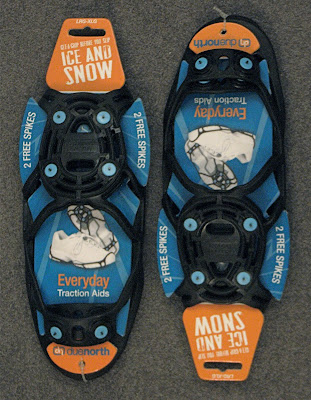 A day of my life wasted.

If you are truly the worlds most incompetent computer programer you are probably employed by UK government to run their online tax system. Last year was a nightmare and finally refused to accept the codes to donate over payment to transgender charity as in previous years when done on paper. This year to be different it just will not let me in! Non of the passwords sent are accepted and noting tells you that after three attempts the system locks you out for two hours and the password is now void anyway! Only after waiting an age on the phone do they tell you this. It is all a pantomime anyway, they know they are not going to get anything from me and it will only cost them to process the account and then as usual they will send me a threatening demand for NO MONEY which must be paid by a certain date. This is almost funny but I know someone who has taken a job with the tax office to see him out till retirement and his department has written off several billion in overpayments which they can’t be bothered to chase down! He is a minion and wants to stay that way and not have this **** on his head, they know he is brighter than the fools in charge and keep trying to promote him but he wants to sleep with a clear conscience.