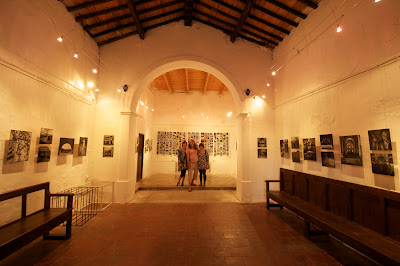 The bells of the chapel are ringing out nine o’clock over the village and two more hot girls are needed to come and have breakfast out on the terrace in the sunshine.

Perhaps we should not have eaten and sipped wine so late into the night but how could we help it. Even though this is the first time we have all met up together you would have thought we had been life long friends the way we got on.

Their late afternoon flight into our tiny local airport was spot on time and their luggage for two weeks stay was easily spotted and whisked out to fill my wee car then they were transported from the edge of civilisation ever deeper into the back of beyond.

They arrived happy due to the gin and tonic on the plane and we settled down to tea and coffee in the sunshine on the terrace before the request to have a look at the exhibition before it closed at eight. I don’t think their enthusiasm was faked, nobody can fake it for that long. Nearly and hour flashed past as we chatted about the pictures, life the universe and everything. Lucy was taking so many pictures her camera was glowing pink then they decided to walk back to fill the rest of the chip and that was the last we saw of them. They do remember saying that the food smells wafting out from here were really good as the headed out of the village! It was an age before we got to use modern communication devices but by then I had to say I can see you out in the street!

The worst thing about the meal was trying to make a choice, naturally we were the last to leave the restaurant with another bottle of rose, so girly.

I think I hear voices. The request is to visit the city to go shopping. Twice in one week! Twice in one month!!! Those bags are already full, where will they put any purchases?

If a bug had not just bitten me I would have signed off from paradise.