You have to read this post as a piece of historical travel writing. I started it on the ferry home but the distractions were too great to finish it in time to post from our stop in England as planned. have to get this out of the way and then I can resume normal service. 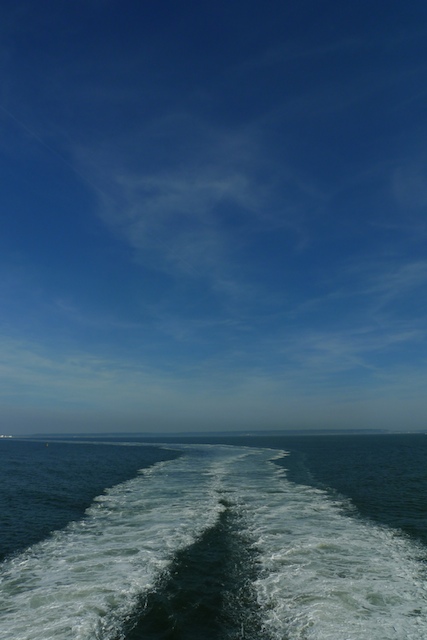 The last post was days ago.( ok this is over two weeks late! ). Long long ago and far far away. The lazy south is now but a dream and we are suffering the torments of hell on a high speed catamaran made of recycled cola cans just shaking it’s self free of French moorings and heading back to our island home. The joy of being crammed in with a rabble of noisy fellow travelers cannot be described, I have selected Kraftwerk, Man Machine to drown them out and it is not working! Julie has just returned from foraging, No haute cuisine tonight. Probably no haute cuisine for the foreseeable future till the excess of the last month or so has worn off. I have been very good skipping courses, cut out cheese altogether! We shared main courses and still feel a little bigger!
We have hit warp speed.39 knots or 71 KPH, a good average on country roads these last few days but out at sea on a car ferry the size of a block of flats! So back a bit. 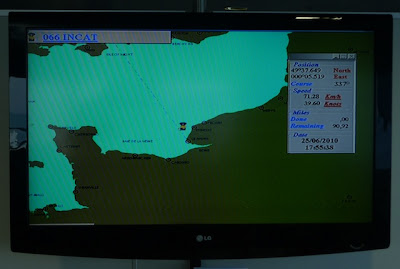 The summer weather really started the day we left at the crack of lunchtime. How much stuff gets collected when you stay put for nearly five weeks. I used to be able to cary all I needed for a three week trip including tent and heavy camera gear on my bike but we have been treating our wee Polo as if it were a Tardis with infinite luggage space to take things home for others as well as ourselves. Yanna wants us to deliver a case of wine to some of her friends so that is one less for us!
When I first started to drive round France with Julie thirty years ago the national routes passed directly through most towns without much trouble and each was a joy to see with all the street life now the best you can hope for is a bypass through the of of town shopping sheds and industrial areas while the centers have been one wayed and pedestrianised with hardly any available parking for visitors. We used to drive up to the local spectacular cathedrals and park outside for the visit then off to the next one. Tody took half the morning for just one of us to get to visit one which we had reconnoitered the evening before to see the Flamboyant facade in the evening light before sitting in a park till nearly ten pm under the plane trees which must have been planted during the revolution more than 220 years ago. When we returned this morning the local market had taken over the streets around the cathedral and half the world had driven in to shop, it would have been easier to walk from our hotel some way away! 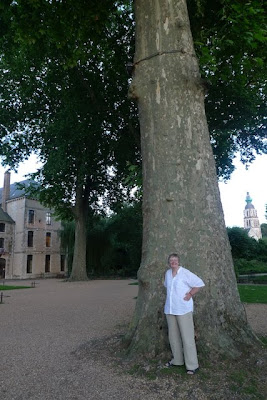 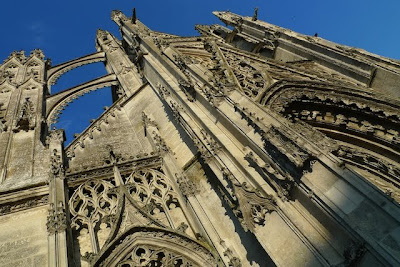 The evening before, on the first day of our trip had been spent in the church at Conques listening to an atmospheric but average organ recital during the evening illuminations of the carved capitals in the high ambulatory which I had paid my 5 euros to walk round. Conques is the sort of place we normally avoid like the plague these days but it had captivated us so much nearly thirty years ago we decided to risk one more visit. The one who has  trouble with stairs booked the room. Just as well since it was a 67 step climb to the top floor in a town where the cars are left well outside the walls! Nothing in the town is flat and it is built on a steep hillside, memory had flattened it somewhat! Time had tidied it up a bit too much, there is beauty in tumble down melancholy! Now it is a boisterous stop over on the booming pilgrimage route to Santiago de Compostella in northern Spain. Just how deeply buried in the countryside we had become we were to find out the next day when we drove the endless double bends through the wooded hills for hours not helped by the roadworks everywhere to suburbanise the deepest country villages. The voyage of discovery was turning into a journey! 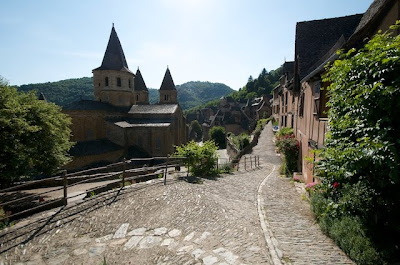 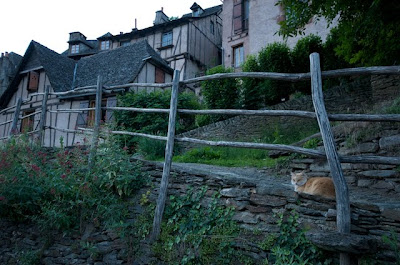 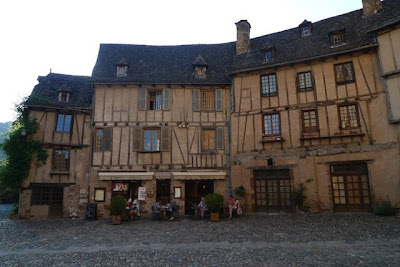 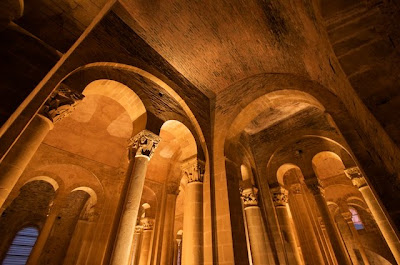 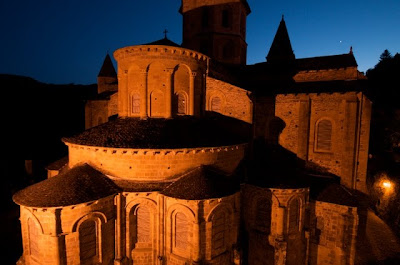 We should have remembered just how much better it is to stay two nights in each place to give more exploring time and as we get older and slower perhaps that should be three. Our haste was due to Julie wishing to get home to watch tennis!
The flying boat got us back to the UK in the early evening where it was only a little over an hour back to my sisters home near Oxford. The next day was to have been another sibling get together with baby sister returning from her holiday cottage and dropping in at lunch time. Unfortunately a motorcyclist had crested the brow of a hill already on the wrong side of the road while they were waiting to turn off the main road. there followed a scene from ER with helicopters and ambulances, their car died at the scene and the insurance has offered them peanuts for it's loss.
The bike rider has broken lots of bones and will not be riding like a lunatic for a good long while, my brother in law has an awkward thumb injury because his  hand was near the gear shift when the bike hit.
Shame since my sister wanted to see that life was fine after my change of status, she is the worrier in the family. We whiled the day away mostly helping with gardening jobs and chatting. I unfolded my bike for a ride around the village which is cute with many old thatched cottages,which have not been photographed, the moment it appeared it was taken from me by my sister and taken for a test ride! When she finally returned it was borrowed yet again!
Sunday was great! Balls were being kicked somewhere on the planet and a vast proportion of the population stayed in on a glorious day to watch it on tv. Three of us set off following Eddie's directions to an old country house with interesting gardens. Few were on the roads and those that were were generally much better behaved than usual, more ball kicking please! We lay having a picnic with red kites which have been reintroduced gliding about playfully in the skies above us. This was the quietist weekend of the year so we saw the property in comfort and uncrowded, Eddie took us down narrow wooded country lanes my sister had never seen before then back onto still empty main roads. 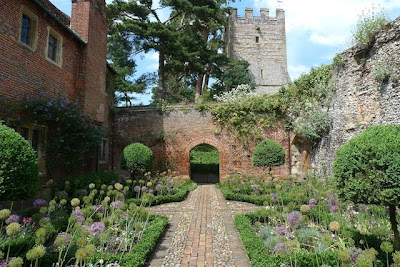 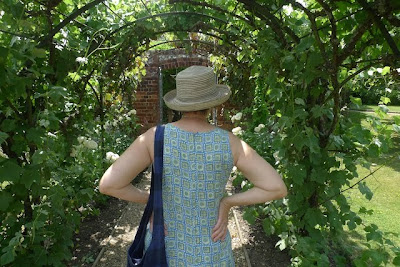 Monday we took our time driving the more crowded motorways north back to settle into a newer normality.
Posted by Caroline at 12:36