The plan to laze in this little paradise soaking a few rays of sunshine as the bones warm through this Easter has slightly backfired. Instead of this magic corner of France being driest and warmest it has for the first time ever all reversed. The meteo channel which I watch for the fashion parade of the women presenters and sometimes miss the weather,  warned of this for days so I worked on a few barrow loads of wood for the woodpile. Not a pristine pile of logs like the picture of Anna’s store a few days ago, the wood here is grubbed up vine stumps since folk here are changing from the old individual low vine bushes to taller wire trained vines which can be harvested with a super expensive machine, pickers are becoming a rare sight in the vineyards now. I wish they had pruned the stumps before creating a huge piled tangle across the road from the house but at least I thought the snipped up remnants of the last year would make good kindling. I survived admonishment for cutting up a woven basket weave chair to make a container for the bits, my sister inlaw loves watching things fall to bits in the garden! All tucked away well under cover from any possible rain ready to keep us cosy and even cook over I thought. The massed percussion which woke me was driving rain which soaked everything! 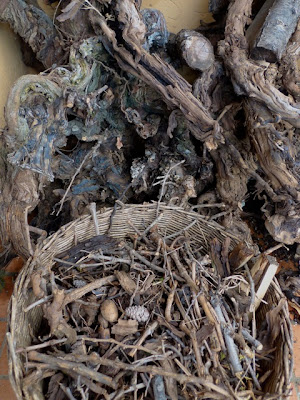 Often we live quietly over here while the restaurant works away, we don’t mind eating scraps sent over like the dogs do, like the foie gras yesterday lunch. Today was going to be quiet so we made up numbers for them and tried a new dish of egg and asparagus which was out of this world, someone has to test these things! We nearly got out of the restaurant before being invited to sit and chat to Eve and David who have just bought an abandoned wine store just a hundred metres away. They had come down a couple of years ago to the wedding of their friend who lives in the castle at the top of the village and fell in love with the area. She was tall and dressed in a fatigue green parachutist jump suit and looked so chic even though she had just taken a break from cleaning out junk abandoned half a century ago. Once we had helped them with their bottle of wine we went to survey the project, hope they have pots of money! 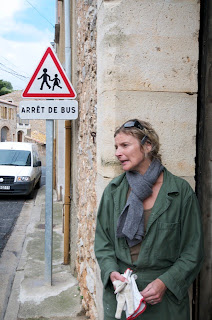 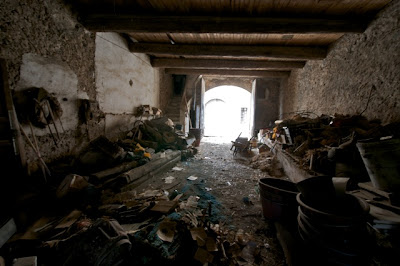 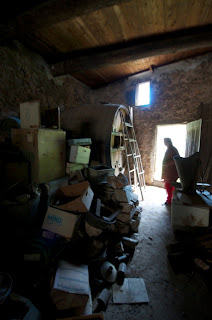 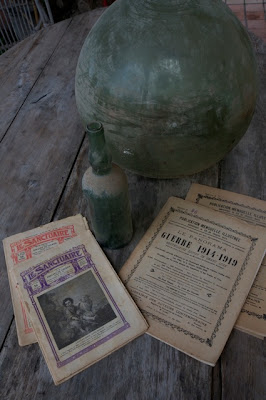 There are a few holes starting to show in the roof which is probably why the owners decided to eventually sell, despite the horrendous downpour we have just had the floor was bone dry and the copper sulphate stored in hessian sacks showed no sign of ever seeing damp. She should have no trouble keeping her architect in order since David her partner (legal civil partnership!) is an architect in Paris while she is a sculptor. Ancient front door is in need of a rebuild at the bottom so she took me to show me one which had been repaired with great sympathy nearby, I said that it was a shame that the guy who had done that one was not coming to visit until next week since the rain had defined exactly where the limit of the problem was, she knows we are on the same wavelength, could be a friendship here! After we had explored the dark cavernous space and were about to leave the repair guy arrived! He knew that the rain would have defined the limit to the problem so drove out of his way with car full of family to check out the job, clearly some worthy folk still.
Now we find that Lisa (who would have thought there could be so many?) and friends of her’s we visited are up from Barcelona to eat  or local oysters and are booked for tonight and it is our job to amuse them and it means we get a chance to taste the goat dish they have on the go. 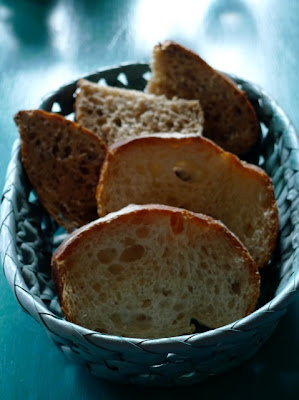 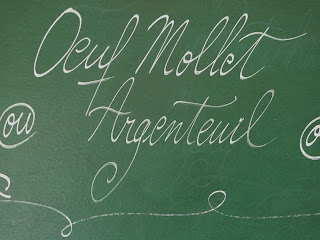 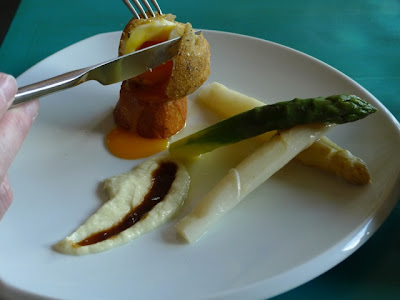 This is not us eating Sophie’s garden clearing goats as promised, The two virgin girl goats turned out to be a pregnant hussy and a castrated boy. The two baby goats turned out to be ultra cute but untamable menaces eating everyone else’s gardens so have been given away while the originals instead of being in the freezer have become registered pets! They are now to fussy about what they eat to be able to clear Sophie’s garden which is what she got them for in the first place! 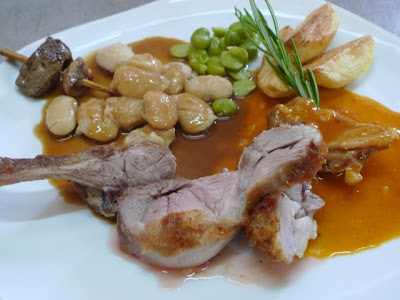 Well that went really well, especially the brochette of interesting internal bits of goatette. Our visitors had eaten three dozen oysters each the previous day down at the lagoon, I think I had just short of a dozen last week, clearly not the appetite which I once had and certainly could not keep up with their drinking. They should get on with the high speed link to Barcelona then we could visit them more easily. Last time we went directly to a party from our airport arrival and even though we were far from central the car parking cost us more than the accommodation for four of us.
Through the colds and subsequent hacking cough phase we have taken up residence at opposite ends of this large bed / sitting room which Yanna built with en-suite bathroom for her mother who used to alternate between us every three months. Julie has lived in great luxury at the bedroom end while I have camped out in a single bed living like a refugee at the far end. Last night we were reunited and together slept like puppies till lunchtime! So much for Easter! They do not seem to bribe children with chocolate eggs here but they do ring the church bells for a special service just across the road, we both remember hearing the bells, making comments about them but immediately being soothed back into a coma. For someone who these days sleeps so little I find it strange just how much of the time here has been slept away. 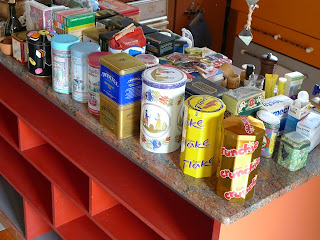 The word for dust in French takes up half a line
this is a nest for dust!
Much of the rest of the time has been spent repairing things and gardening with an occasional trip out. My packed clothing was mostly for a good 4 to 5 degrees warmer so I have not been my glamorous self and after a week I found all our collection of clothes which we leave here, for me tatty working clothes which has reinforced something of a “not much change really” attitude slipping in. Yanna has grumbled that with less muscle strength I am not quite as useful as before, him and he still slips into conversations occasionally though more to a slight annoyance than outrage now. Rushing to the shop just before closing time dressed in rags was bound to bring out an incorrect response but they are so rare these days I wondered who they were talking to! Duh!
Posted by Caroline at 13:30