Well, who would have thought? Life just goes on.
I guess this is what we long and hope for, years, decades of wondering if it could possibly work. The face caught in a mirror tells you “don’t be crazy” as the results of a life on testosterone have ravaged your once soft features and time is thinning hair and receding the hairline. Your life is a mess with a constant swirl of thoughts of “what if I had done this” or “what extra circle of hell would I be in if I follow my heart”, “what would I look like and will it be good enough to manage to live a new life” and the list goes on. Why can’t the world see your problem and why can’t you just get the help which you so obviously need!?
All that internal angst ended some while ago when I finally decided to step out into the world. It comes as a big shock to find all that free time inside your head! With so long a time since you did anything other than obsess about your absurd position in society you are not going to be trained to be able to quickly fill this time, what on earth to do with it all? I have not yet found out, I guess much of what I do would be called daydreaming, like sitting on a wide endless beach enjoying the open vastness of it all after the noisy prison cell of former times.
I am happy to fill my time with the everyday things of life and if you live in an old house like this one there are plenty of everyday things! 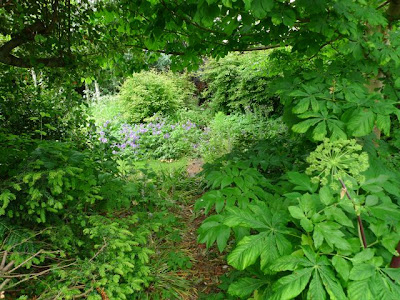 Since we returned from our road trip the garden has taken up most of my time, not least because I am trying to finish constructing a ramped walkway round to the large greenhouse where we can sit when conditions are too poor to sit outside. This is Scotland on the same latitude as Moscow after all! This is a larger project than expected and now has devastated this whole section of garden but will eventually give us somewhere sheltered from the evening onshore cool breeze whilst catching the late afternoon sun when it shines.
I started this project last year and no sooner had I exposed the earth beneath the old stepping stone pathway than it started to rain and the ground remained wet for most of the “summer”! Our return from the trip saw scorching temperatures for a few days and I wondered how I was going to be able to work in that heat. Last year on one hot day I was briefly tempted to slip off my tee shirt to help get on but was struck by a strange mixture of emotions! Here I was, someone who regularly in the past gardened merrily in the nude found myself very uncomfortable with the idea of digging away topless at a time when you would have still taken a look and described me as mostly topless!
Not really an option this year as the top bumps are developing nicely and a number of over mature trees have been removed which used to give me the total privacy I craved. The new me is happy for the garden to have been opened up slightly even though a number of houses can now over look various parts though none can see me slaving away on the new project.
After two days of heat we have gone back to Spring like temperatures with occasional showers but conditions have allowed me to progress the excavations which have been like an archeological dig finding remnants of brick and concrete structures and wrought iron pipes buried when the house was “modernised” in 1896! One thing I do wish is that the old me had not been so wound up on all those thoughts of misery and self destruction with little thought of more than a few months into the future, that old me had far more muscle and in a manic phase could have used that testosterone fueled muscle to do this kind of job so much more easily! 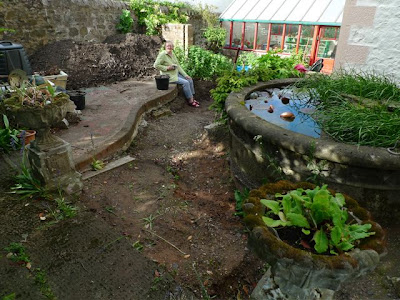 Once the hole is dug out I shall be able to start putting in a rubble foundation from all the rubbish in corners of the garden and from breaking up the frost ruined driveway. Did I mention rebuilding the driveway!?
So now you know why I have not been posting much since we returned, finish at 10pm with the long light we get at this latitude and sleep like the dead.
It is drying up after the overnight showers so have to get on...
Posted by Caroline at 11:21