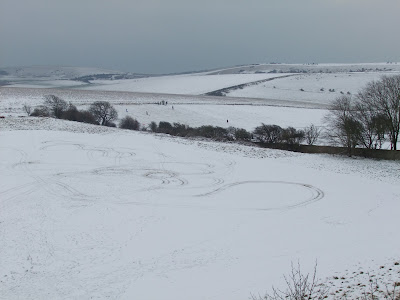 A visitors view from my spa room.

My Spa trip is over. I arrived just before the snow fell and then froze and I escaped while the roads were clear just before the next fall of snow! Back home in Scotland it might be a bit frosty in the mornings but thankfully we have  remained clear of white stuff.
I have generally been very lucky with the support of friends and family throughout my transition. Some not so close family members have been the least enthusiastic, small in number most have shown signs of melting their coldness.
Sadly there is one of my partner’s cousins who remains very frosty, this is interesting because her brothers who arrived nine and ten years after she did,  called her “Frosty”!
She had always been one of Julie’s closest friends as well as a cousin but has been distant to us both in recent times just when Julie really could have benefited from some support. Perhaps it is just as well that she did not get to preach her negative bile, things could have taken a different path…
Her frosty demeanor has put a business meeting air into family party gatherings while we remained civilised, it is enough to make me try to keep away from some of these gatherings but I don’t wish Julie to loose out on spending time with her. I encouraged a visit while I was away at the spa so she went to stay and they even came and stayed here for a couple of days afterwards which she has not done for many years now, so I had imagined that they had reactivated their old closeness.
Ever the polite one I called Frosty to thank her for spending so much time with Julie while I was away, it was less fun a call than the uninvited sales calls for energy plans or double glazing, much frostier than usual…
I mentioned the extra chill to Julie who then told me that Frosty had suddenly come out with a long statement about why she would never be able to forgive me for having cheated her cousin by marrying her half a lifetime ago! Julie was so stunned by the statement that she did not try to debate the irrationalities in it so we are no further forward than before, only we now have confirmation of my suspicions.
It was an odd feeling knowing of such complete rejection and it has had me thinking with a different perspective about all those whom I have come across who have had to endure much deeper rejections than mine. Perhaps this poor woman has never forgiven me for my politely rejecting her sexual advances soon after I had started living with her cousin!