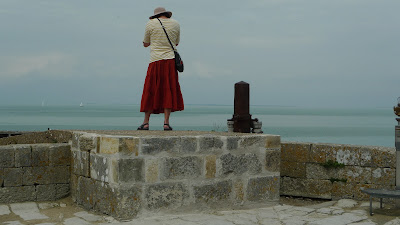 As I watch the rain lashing against the windows with summer showers, an inch today, I think back with fondness to my break in France in the warm sunshine. I guess by now you are fairly fed up with posts about my favourite beach so this will be the last one for a while.
It will be assumed that going to a naturist beach is about seeing and being seen because that is what you all do on the textile beaches, then have a swim and lie about on a soggy wet costume, euk! I usually go early or late on when most have left or are leaving, often I will be almost alone on my mile or so of sand, alone with my thoughts, sometimes with the sound of the sea lapping on the beach, sometimes with my stamp sized metallic pink iPod shuffle dangling round my neck like a necklace surprising me from the mainly poppy music I have on it for playing in the car. I have no idea how many tracks are stored on the device, it has just been plugged in to charge and does not show a detailed list, there are enough that it is usually an age before a track comes up for a second play. Progress along the beach is determined by what comes up, some tracks speed me up others reduce me to a snails pace others have me dancing along…
I have an interesting synesthesia, unlike a painter I knew who had a specific colour for each person she knew, I often have a physical place locked in association with a subject or individual, completely random and often quite illogical. A section of beach is associated with a friend who I first learned was seriously ill exactly a year ago from the time I was on the beach. There was no reason to think that we would ever be together on that beach, probably quite the opposite. We were of similar ages and had grown liking very much the same music. While nearing that section of beach one day a certain track lasting 13 minutes 39 seconds came on with some words which brought a few tears.

Hurrah I awake from yesterday
Alive but the war is here to stay
So my love Catherina and me
Decide to take our last walk
Through the noise to the sea
Not to die but to be re-born
Away from a life so battered and torn.…
As our feet find the sand
And the sea is strait ahead..
Strait ahead.....
Well its too bad
That our friends
Cant be with us today
Well thats too bad…


I walk the beach for about forty minutes each time I visit and get a little tearful the next time I go some days later as I remember the track which had played and as I approached the spot it came on again. Life is full of unexplained coincidences so I guess this is one such but it is hard to explain it happening again a few days later…
I never took music to the beach again, just my thoughts…
Where ever you are now Melissa, I hope it is as beautiful as that spot on the beach...


My blog started on a beach just three and a half years ago, my place of complete happiness, at one with nature and away from the madness of the grasping human world.

I have always been more comfortable out of clothes than in them, even the scantiest beach costume is laden with messages I had no wish to send especially in the old false life. As for wearing a wet costume after a swim when you could be dry and luxuriating in the caresses of the sun and the breeze…
Even with the body I knew should not be mine I was comfortable wandering my quiet strip of sandy shoreline hypnotized by the ever changing lap of waves. Over the thirty years visiting this part of the Mediterranean my body has changed in so many ways and I thought hat I had found my maximum on the scale of comfort and pleasure. I was so wrong…
I have discovered that there is an 11 setting past my old maximum 10! As a test of the final stage in my transformation this confirmed just how much this was meant to be for me. For a world full of beings who have never had to spend a moment with doubt about who and what they are in the greater scheme of things it is impossible to fully express just what it is like to live with that question buzzing in your head the whole time. You live in fear of expressing how you feel because the fact that what you are suffering though well understood and documented by medical science has been denied and daemoised.
daemon 1 |ˈdēmən|(also daimon )
noun
1 (in ancient Greek belief) a divinity or supernatural being of a nature between gods and humans.
• an inner or attendant spirit or inspiring force.
2 archaic spelling of demon1.
Well, I am a bit archaic but doubt that I can any longer claim to be so much of a supernatural being.
I feel comfortable in my own skin in ways that I never imagined possible, how I should have felt from day one but for the quality control problem at birth. I have read so many times about the operation to change a part which not many people would ever be able to see had been changed was not urgent or necessary for someone to live a comfortable life in transition. I had live the halfway life and believed that if necessary I could live fairly comfortably like that. I even believed that I would have, given the choice, chosen procedures to enhance my ability to easily appear more feminine but sadly and strangely here in the UK appearance is of extremely low priority in treating this condition!
The storm has passed and the sunlight is finally breaking through the clouds in my life. A bit late in the day but I never thought I would ever get to this point of wholeness, in fact was told in no uncertain terms that I would get no help in my lifetime so go away and just get on with life! That doctor has been proved wrong in the most emphatic way.
Those decades trapped inside my own misshaped body are, like many human painful injuries, fading from memory and taking on something like a memory of a bad dream. I look down and find it hard to visualise the thing which gave me such torment ever having actually been there!
I envy those of you who felt this comfortable in your own skin from birth because it feels so much better than I ever thought it would...

From Anji to Angers and home. 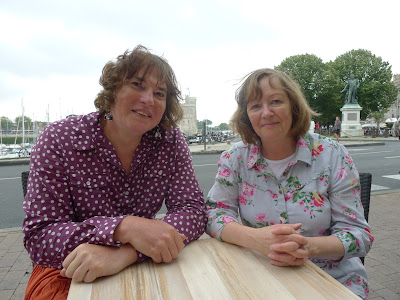 For years I had been telling Anji that I should be flying over her home at a certain time whilst going to or from our holidays to visit family in France. This year we planned to drive past near to the area where I knew she lived so suggested we meet up for a coffee en route. Her children were a little shocked, don’t you know that you should not just agree to meet virtual people from the net!
We picked a time and an easy to find cafe near the old port in La Rochelle. The sat nav first took us on a tour of the tiny roads through the old town, my fault for picking a road name with old port in it… Escaping from the quaint arcaded streets which we explored on foot about a dozen years ago we finally found parking in the newer port and walked back, no sooner had we spotted the cafe a few minutes ahead of time than Anji spotted us. Three grand cremes and half an hour later and you would have thought we had been meeting like that for years. Anji has been on the net blogging for about nine years so I was amazed to find that I was the first to change from virtual to corporeal for her, at least she can report to the children that all went well…
This was the homeward leg of our road trip and our last day in France driving from our few days in a holiday home on the Ile de Ré just a bridge away from La Rochelle to the over night ferry from Caen on the Normandy coast. Half way was something we had wanted to visit for ages, naturally Julie had seen it ages before she met we but… Angers castle is what you imagine when you think of a medieval castle, if you think of such things! A kilometer round which is a big half mile for the non metric countries, it is vast and inside is a real wonder. In just seven years finishing in 1382 this tapestry was made, there is now only 103 metres of the original 140 left and it is 4.4 metres high and so fine that the knots cannot be seen on the back. Naturally humans being as humans are they expended all this effort to show how miserable life could be made if humans did not conform… So that was the Apocalypse then. 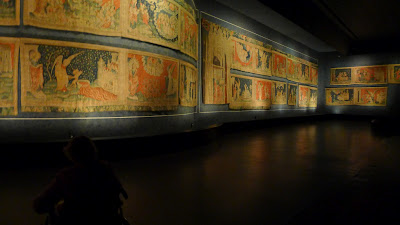 On the bright side we only wished to see the tapestries but expected to pay 8.50 euros each and 4.50 each for an audio guide but paid 6.00 because I had pushed Julie in the wheelchair to save her energy for the visit, I as pusher get free and the price was reduced because we could not get round the castle! Lucky sometimes.

How time flies, that was over a week ago and we are now back in cold and wet Scotland after a few days in cold and wet Oxford. There was a brief window of dryness when there and I was able to visit my friend Jenny and meet two of her friends, Nikky and Dawn who I had come across on the net occasionally. Clearly this had been a trip for meeting virtual friends and non of us seem to be axe murderers…
My mind is not yet returned to blogging mode but I expect that normal service shall be resumed shortly.