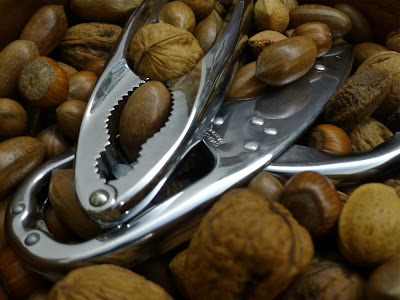 For many years I have been collecting up to a couple of buckets full of walnuts which dropped from a tree at the end of the street. Most passers by and the teachers who use it as a handy parking spot just crushed them into the ground so I had to be watchful of the weather for a wind which would blow them away from the garden where the tree grew, the tenants of the cottage never even bothered with those which fell into the garden! They were so fresh and juicy compared to anything which you can buy but they are no more. The cottage which had been owned by the same person without any renovations for nearly eighty years has finally been sold and the first thing the new owners did was make a foul mess of the trees buy simply hacking off all branches which could have hung over the street.

So now we have butchered trees to look at and I have had to buy nuts at horrendous prices, how else can I lay down a little protective fat layer?

Today I just wanted to close my eyes and hibernate! The wind is so strong that rain has been thrashing against the windows all day and gloomy was as bright as it got… Perhaps we have just been too lucky with a fairly dry period and clear nights with bright moons lighting up the world hardly any less bright than we have had today. After a long spell of clear starry nights it finally clouded over in time to block out any chance of seeing the recent meteor showers, seems an age since I have seen them in any number.

Early in the week I went to bed only to find that I felt more awake than I usually do during the daytime! This happens on and off, these days usually months between events. Usually it is just for a night or two though once thirty years ago it lasted over a week with only an hour nap each day. For several years as I made my slow transition I would come here to tap on the keys, skipping from one link to the other until tiredness came so it was often three, four or five in the morning before I forced myself to try sleep. The only sure fire way I know how to get to sleep is to drink a cup of strong coffee and try to watch a documentary about something which interests me, deep sleep before I know it! Lying in bed to this day I have no idea how to induce sleep, it just happens mid thought if I am lucky.

If I am unlucky the invisible switch is illusive and the mind is free to race. For an age thoughts of hopelessness and helplessness were endless holding most positive thoughts at bay. It was like the constant loud noise on the streets of a busy city when you cannot converse with someone walking along side. On the night in question I lay there for a while waiting for unconsciousness and apart from the tinnitus there was utter silence. There were no pressing problems to think about and all the transitional nonsense and associated depressions are distant memories. After a while I just had to get up and wander about the cooling house. I worked on the dripping cistern, flimsy plastic bits are failing after about seven years whilst the WC at the back door still works fine with hardly any effort applied to the chain pull and it is nearly one hundred and twenty years old! Then I came here to check on emails and blogs. There is less and less activity on those as the months and years pass and my urge to read up every tempting link is gone. I was even reduced to clicking on my own photographs for a while before abandoning this screen for that of my Kindle.

When the clock struck five I gave in and resorted twosome herbal sleep inducing pills. The chemical pills had such a list of scary possible side effects I stopped keeping them in the cabinet...

Perhaps I should have been tapping out this post then but when the head is so calm and empty the urge is just not there. I would never have imagined during all those decades of torment that one day I would ever feel so content...