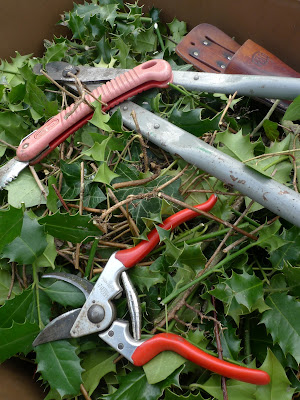 What an odd start to the year in so many ways. It had been nearly two years since I suffered a cold, thankfully not getting one at a critical time last year which would have been a disaster, any way I have made up for it with one which has left me with the worst cough I can ever remember. Nearly four weeks on it as almost abated, no longer spending an hour coughing myself to sleep with exhaustion.

I was annoyed when it first hit since I had been getting on so well working in the garden during dry windless days and it looked like spring was not far away and it was a race to tidy up before too much growth started. I thought that I had missed out on my target for this year then the temperatures dropped like a stone and snow and frost became daily events. The BBC has a national gardening programme on TV with a presenter many of my girl friends drool over, I can almost see what attracts them, last week he was bemoaning the three week hiatus which had held up the new growth. Finally the snow has gone, just a few flurries in the air, with the clock change the days are light until past eight and I have been able to throw myself at the task with a vengeance. 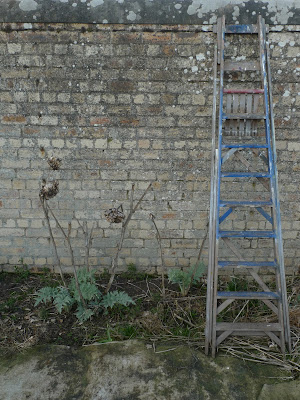 Thirty years ago when I first encountered the jungle the garden had become the gardener from one of the local grand houses came by and told me that I should call in the equivalence of an agent orange air strike, kill every living thing and wait a year before starting from scratch. I am soft hearted where plants are concerned and I could not bring myself to kill old fruit trees even those which were too high to harvest and some which had to be seen as decorative rather than fruitful… Hindsight is a great thing and I now know that I should have taken his advice and devoted that year to repairing the summer house and surrounding walls though I could hardly see them. 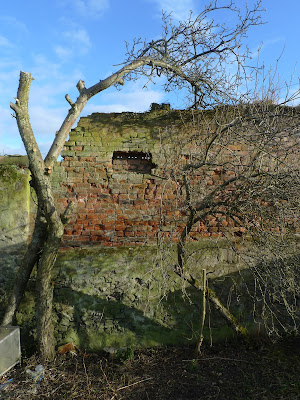 The old me was something of a pessimist expecting my end to never be far off so not making great future plans or working as hard on maintenance as I perhaps should have. The garden has in many ways followed a parallel path to my transition. Many years of wild chaos, then when the period of transition started there was less time for garden as all attention and cash was put into being the new me with constant appointments for hair removal, gender clinic etc and perhaps too much flouncing about the garden in flowing clothes rather than getting down to getting dirty. 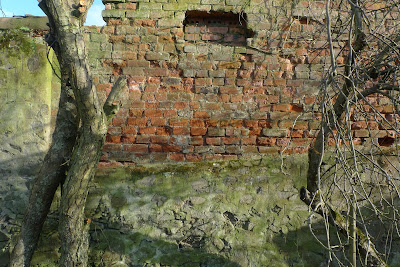 Sadly my usual chainsaw lender has both his machines out of order awaiting repairs. I used to be able to swing them about with the ease of the light sabers in star wars but I can still manage them reasonably well even with the muscle loss. The plan had been to reduce all the growth covering the walls to fire wood and shredded compost in a day or so but I have had to do as much as I could with hand tools taking weeks of work. Climbing to lob off three inch thick branches at twelve feet in the air was a challenge as was chopping up great quantities of ivy and holly to be sent to the local recycling compost centre. If we have some decent summer days there are enough chopped branches to fuel a wood grill in an ancient old iron wheelbarrow for the whole season. I am now faced with two hundred feet of wall needing a great deal of repointing! If I don’t post much you know where I will be... 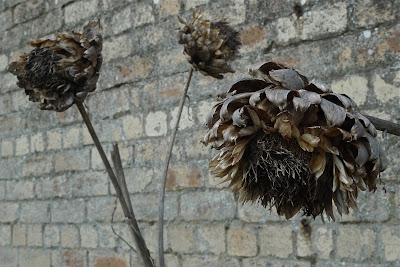 Santa did not provide the new steps which I had hoped for but having spent several days trying to remember to avoid using the second from top wood-wormed step I think it will soon be time to take out the seats from the van and go shopping for something in aluminium... 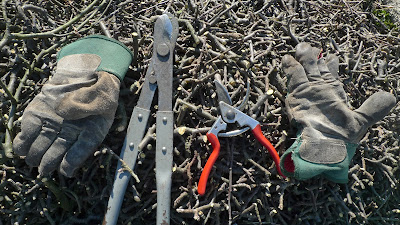