It all started when we arrived home to find that the TV ariel had snapped off while we were away and once the access tower was up... 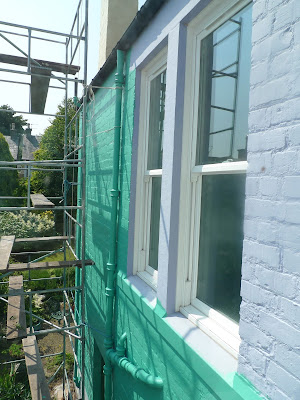 Yesterday was most peculiar, the air outside was not cold or even cool but strangely warm even in the shade! I cannot remember how long it is since this last happened but I took advantage of it and opened all the upstairs windows for cleaning then hung out as far as I dared and painted te walls as far as I could reach on one side of the house. Today resorted to normality and I wore many layers and did not venture high for long but hope the forecast is correct and more high wall will change colour tomorrow.

When I first came to live here half a lifetime ago the front of Bramble Cottage was in need of much care and attention after a couple decades of neglect by Julie’s parents. One academic latterly living in America where he was teaching at a university and an artistic mother who loved the look of weathered surfaces and could not see a way to fund the repairs of anything except emergencies… Then I turned up and she loved the way that I could fix things just using bits and pieces I found lying about, there was a lot of stuff just laying about!

The front of the house had once been painted white but much had peeled off through lack of preparation to the surface before the paint was slapped on. Much of the rest of the house had once been painted a dark elephant grey similar to the rubble stone which made up some of the walls.  Thought a fresh white front would at least give the place an air of respectability, not something they actually wanted to project preferring bohemian chic.

One day waiting parked outside a paint shop in the town, when such things existed “in” the town, I made a spontaneous decision to buy twenty liters of white masonry paint to start the makeover and put them in the back of the van. When we got home I was surprised by the lack of enthusiasm for my proposed project and even more surprised by the question of why I had bought white! I said that the front had been white and I was just going to make it immaculate again. It seems that it was only white because one day someone knocked on the door and offered to paint the front for an affordable price and white was the choice there being no other colour! They never wanted to see it white ever again!

I returned to the paint shop and told them my story or woe and how they would prefer the walls to be the colour of a dull grey day to blend with the sky. Today if you want to have a non standard colour mixed a few squirts of extra colour added to the basic tin of paint will cost an extra 66%, but these guys just took the white paint added the extra squirt to make it look dirty grey, shook it up on their machine and wished me luck with the painting. That goodwill got them all my decorating business until they were forced to close by city centre rent prices…

I applied a lot more than the suggested two coats to a well prepared repaired and sealed wall so the house has always looked in good condition as the paint ages but after about ten years the surface starts to become weathered from smooth glossy to matt and lichen can start to adhere to it which at least shows that we have very good air quality! People think I am mad when I start talking about repainting since it usually looks better than their own walls… I had long ago thought that if I ever lived long enough I would have done a final thorough repainting before I reached sixty and would then rely on increasingly poor eyesight to stop me worrying about it ever again.

Over the years that original choice of grey which did make the house meld with the sky has slowly evolved through warmer creamier greys to the one which I am starting to cover up which had weathered to a slightly lilac grey with corner stones picked out in a darker colour which strangely weathered and faded to a strange dirty pinkish colour. This was when I first arrived a very grey village, grey stone walls everywhere, a hard andesite igneous rock is the local stone, and greyish Scottish slates on the roofs but slowly houses have started to be decorated with warmer, creamier colours and new builds have warm coloured brick walls and red tiled roofs so our new choice from this year’s ready mix colours of “county cream” is not as shocking as it would have been twenty years or more ago. Until it is all painted we will not decide on which bits to pick out in a contrasting colour or decide what sort of colour that should be.

We have has several wet summers in a row so this job has been  delayed a little longer than I would have liked, a few spots of repair are needed where the guttering has leaked but if this fine weather can keep going for another week or so the tricky front will be finished and the less critical sides can be done in sections when the weather permits.

We decided to splash out on one tin of mixed colour for one of the back walls mostly only seen from the garden, all the advertising says bring along a sample of a colour you like and we will match it with our mixing machine. We did not need to do that since there was a colour on their extensive chart which we liked, the first shop, a DIY supermarket type were surprised that first we would pay the outrageous price and secondly that we wanted such a strong colour which they were not allowed to do! Off to the professional paint supplier and they could mix it in any type of paint except masonry paint! Julie chose something else and thank goodness they were having a promotion on masonry paint that week. Sadly once the second choice had been mixed and shaken the girl serving said that perhaps she could have just lied to the machine about which type of paint base she was using… So no deep foxglove purple for us...

If I don’t post too often for the next wee while you can guess why.