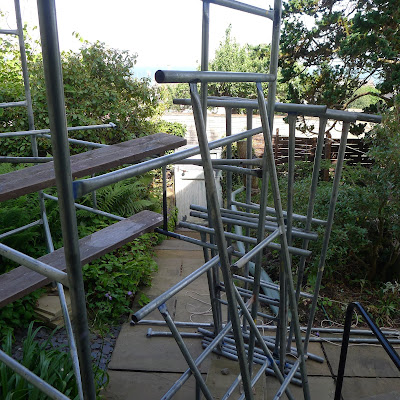 Two weeks have passed since my last post and I have been quiet because with this mainly warm dry weather I have taken advantage and often worked on the house until the light fades just after ten.

It is by general agreement about seven years since we have had decent summer weather and now investigation has shown how wet rot has gained a foothold in some of the roof windows and will take a chunk of our savings to fix with replacements… Thank goodness for old people’s discount day at the DIY store, nearly £300 worth of paint bought already and another £100 needed by Wednesday at this rate, with luck I shall never actually need to do this job again. All the neighbours are impressed that I am still able to climb the scaffolding and ladders, they just use cheque books! Thankfully they could not see me start painting the gable end where I used the ladder. It is impossible to use it at an angle because the glasshouse is in the way, so I rested one end on the tower and one on the ridge of the glasshouse, which is fortunately very strong, placed a plank on the rungs and worked from there… Two more weeks of good weather and most of this job could be finished. Julie wants a garden party on the 17th of August though many of our friends claim to be going away, perhaps fearing that they will be handed paint brushes! 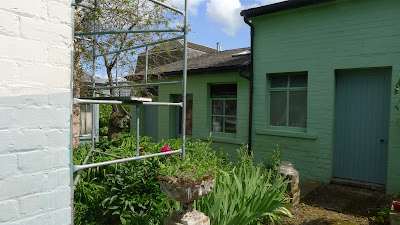 Our elderly, in body but not in spirit, neighbours are finding life catching up on them and I was called round from the painting one day to help at the cottage next door to help get Douglas up from where he had fallen to the floor. This time thankfully it was not a stroke like last time but an infected toe! He had neglected to get it dealt with and between the infection and the powerful injection given to treat it he became disorientated and unsteady but refused to sit quietly. Once we got him sitting up against the wall and I sat with him we had a surreal conversation as he slowly regained his composure, if we do this many more times people are going to jump to the wrong conclusions! Finally we got him walking with support and settled in an armchair where he slept most of the rest of the day away. They unfortunately have been visiting a friend in a nursing home for the last eighteen months, he is many years younger, and they fear that if they give in to too much medical intervention that is where they will end up and they are not keen. This time they have seen a doctor but with some reluctance!

At least they get the chance, when the phone rang the next morning I had a sense of dread that Douglas had met his end but even sadder it was news that the best of all Clara’s cousins children who had gone out to watch Shakespeare in the Park had a seizure and died aged twenty nine. She had just got her dream job working for a publisher, this was a child who was writing books before she went to school! She had a fabulously bubbly nature and all her life had always greeted me with a warm hug and had often chosen to sit by me at big family meals. Our own generation regularly drop but this is hard loosing one from the next generation and a very bad choice for the first to go...