Tongue, why has it taken me so long…?

Life moves on, the garden is filling up with fallen leaves and mornings are often sparkling with frost. I had hoped to have much tidied up by now but I underestimated how long it would be before my toes healed up, this is where juicy details would be if my readership were not so squeamish, now after a third course of antibiotics I am finally able to get out and about again. But not for long with the chilly days!

There was a great enthusiastic attendance at the exhibition and a few possibilities for showing it elsewhere in the future as the anniversary of the First World war looms. They were never going to be the sorts of images many would wish to live with even when told that two of the largest works have been in an American foundations' collection of 20th century photography for over a decade… The gallery was happy to just put on an impressive show and both  the painter and me were willing to put ourselves out and show work we both said would not sell. It will remain up for another couple of weeks to be seen by appointment only then they are getting repriced to make them totally unsellable but the collection will available for hiring out for a fee. Just need to find a good place to store them again.

The picked and stored apples are going fast, just remembered I have a few pears in the cold and dark which I should check over. The last remaining cropping  this year was a couple of vegetable marrows and a trug full of beetroot. There is something satisfying about squeezing a well cooked beetroot to slip off the outer skin, those more physically active than myself would probably find it quite erotic. Perhaps you will all now be sowing beetroot seeds next year... I really love pickled beetroot, thankfully it’s calorie count is low because my preferred portion size is large.

Traditionally in Britain the moment all the exhortations to spend money at the year end holiday on things you and your friends don’t need using money you don’t have the screens and letter boxes fill up with new demands to book early for a summer holiday.

Well we can ignore those advertisements too. The moment the first frost hit my cycling friend from the summer got into action with a holiday let she had reserved ad paid the required deposit. We were only a couple of days into our summer cycling week when her reservation for next year was mentioned, she had made enquiries because there were two things which required here presence during a three week period next summer and it would be much more convenient to drive for a few hours each time than to make two arduous return journeys from the UK. She had found a house on a Danish island with three bedrooms at a price which in France would go nowhere near renting a mobile home… I was asked if I would like to drop by for more island cycling, hummmm, have to think about that… I booked a ferry crossing just the other day to ensure that we get a comfortable outside cabin each way. Anyone dreaming that I would be buying them a yuletide present had better forget it, I had expected that we would only have to pay a deposit now but the whole price was removed from our account! The final series of Borgen has just started, I watched the first series through the night with subtitles whilst I lay recovering in Brighton nearly two years ago, Danish is still incomprehensible…

I can’t believe how unadventurous I have been all my life with tongue. As much as I have enjoyed tongue on tongue for decades it has always been just the same every time. Obviously sometimes would be more pleasurable than others but basically all slight variations on the same thing. Many find tongues a bit creepy but they give me pleasure like nothing else but this week I got more intimate with a tongue than I have ever done before in my quite long life. 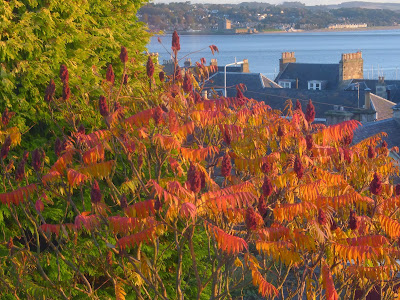 I curse all those trendy TV chefs who have turned all the once cheap cuts of meat which we were going to slowly cook with all the extra free time retirement would give us. Lamb shanks used to be so cheap they were given to our relations restaurant staff now they are hardly affordable on the menu and cost a fortune at the butchers if you can find them. We are eating a lot of warming soups now the weather has turned, mostly vegetable based, four pumpkins still sit in the cool near the back door waiting their turn. As a meaty change we used to buy whole OX tails which would last us days but they too are harder to get and are so expensive are sold in about four portions! Thankfully there are still some cheap beef cuts from the shin which slowly simmered add a succulent meaty note to a soup and with the addition of dried Scotch broth mix of peas barley and lentils is quite filling. Soups have been shown to keep you satisfied longer than eating exactly the same ingredients as a conventional meal. Need all the help to make up for eight weeks of not being able to walk about and exercise which has cost me a few of the pounds I had lost. Time to get back on track. One way is to eat really lean meats like chicken but for the first time in my life I got a whole ox tongue to cook myself rather than buying sliced prepared products. A good overnight soak in brine followed by three hours simmering in beef stock with chunky onions, leeks, carrots, celery, turnips, several bay leaves and half a dozen pepper corns cooked it to perfection. Once cooked it was lifted out of the pot and plunged into cold water which seemed to help release the outer membrane or skin leaving lean meat which took four days to eat… Total cost £4, an absolute bargain. Julie kept well away from the really up close and intimate parts but was more than happy to join in and eat it. The first serving was a thick warm slice each with vegetables from the cooking but she preferred it later when served cold and thin sliced. The stock and remaining vegetables made an exquisite soup when bulked out with some beans.