Each year now springs new surprises, this one is the speed with which plants are eager to  show their first shoots whilst the rain hardly seems to stop, the wind blows hard and the threat of chill winter weather still hangs over us.

Perversely as soon as I started a project of sorting out the attic spaces and renovating and painting useable old furniture stored there than the rains have paused and every opportunity to get out for making some vitamin D and do some garden work has been taken.

My old self used the garden as a sanctuary and place to hide from the world. It may be a fairly small suburban garden but that never affected or hindered my love of trees which were planted as a visual shelter from the surrounding cottages allowing me to garden as one with nature, saves on clothing costs… A garden is in constant flux and my barrier to the world has been breaking down over the same period as my transition. First the older trees which were here long before I arrived have passed maturity and needed to be removed or as in one case dramatically came down in one of the increasingly strong winds at odd times of the year. The trees I planted to block out prying eyes have grown quite large, I never in all honesty thought that I would still be here and alive to have to deal with them but that time has come... The recent wet summers have caused a fast spurt of growth blocking out a great deal of light from the garden, even the grass has decided to give way to moss and trees which a short while ago were decorative now present  some danger if they get blown down. It was perhaps a mistake to believe the growing rates when quoted, they were planted in rich garden soil with no competition! As much as it has pained me to make the decision, some have had their sentence passed.

Someone recently told me of a girlfriend’s motto when faced with a job, “how hard can it be?” and regular readers will know that is also my attitude abetted by a very empty purse. I finally got round to purchasing a new chain for the saw I bought last year for pruning and a file to keep it and the original chain sharp and ready for action, a face guard also seemed a wise investment and then I was ready.

First victim has been my beloved chestnut first planted over twenty five years ago to replace the large pear tree slashed down by the folk who had just moved in next door and were turning their garden into a field for the boy child to kick his ball about. For many years I thought they must have given away or murdered their daughter and the mother for they were never seen from one years end to the next! The cute wee tree planted all those years ago was to have sheltered us in our old age from the rays whizzing down through the hole in the ozone layer, remember when that was the only topic of scientific news? Our tree was wonderfully sculptural during the winter and looked marvellous with the fresh spring green, we often missed out on the show of flower because of our holiday trips before the European summer heat set in. Autumn with the change of colour was a treat and the falling leaves were creating a great deal of new soil and fronded a duvet for the plants waiting for winter to end, especially the increasing small bluebell wood developing under the tree. In the summer it was a bit of a large sun block for the whole afternoon…

Well, saw plugged in, I had to get the tree down before too much more sprouted from the ground to be trampled under foot and falling tree. I decided exactly where it needed to fall, over but not damaging the mossy grassy patch, not a lawn, but not flattening the washing pole or the compost bin. It landed with one twig touching the washing pole and a light branch resting gently on the bin, it fell so gently that there is hardly a scratch in the garden and nobody even heard it fall… Big smile and mental pat on back! 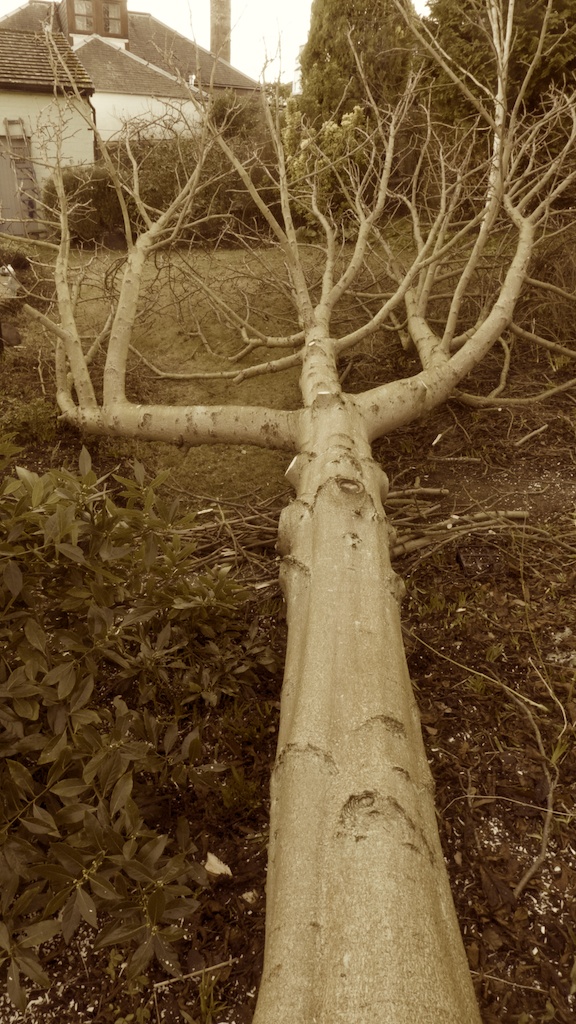 A large space has opened up again to be put back to growing vegetables as I used to do only this time I hope to find a way of buying a polytunnel to shelter and extend out miserably short growing season.

So my old closed in garden world mirrors my life in widening out to be open and sunny.

Almost to balance the joy of real life, computer life is trying to drive me crazy  in so many ways. The machine which helped save my life grinds on as if it is swimming through treacle and is erratic in it’s behaviour as if in sympathy with the ghastly powers behind the services we have enjoyed and taken for granted for so many years. I am sure that most are delighted by the increasing aggregation of services without asking first if we wish every click we make being shown on every service or having to be a subservient slave to f******* or g***** to be able to join in and make comments on so many sites. I have never been too private online nor have I been too blatant either but times and services change and I can no longer put in the energy to fight the changes.

I have withdrawn from various parts of the net before and got abuse for telling folk in advance that I was leaving. Some of you have come to know me and have contacted me outside of this blog and I hope that may continue. I have spent many weeks seeking out the countless numbers I have encountered along the way to see that they too have survived though so many have just melted away…

I used to think that the blog was such a part of my life that I would be here for the indefinite future to show the world that even someone like me could find a new life and perhaps help others believe that they too could change their lives for the better. I know that a few of us have gained greatly from helping each other along the way. I can only hope all find the joy in change which I have found.

It is painfully emotional experience to be tapping out a final farewell post. The blog will remain up though despite ideas about once being on the net it will be there forever, I am sure fewer and fewer will find it in future and even fewer will ever be drawn to read it through like I have read so many other's blogs before. I have personally gained much from bearing my soul to the screen and found ways to delve deep into long hidden memories about my former tortured self buried in lost time…

A television programme from my childhood used to end with a voice over with the words which seem appropriate:-

"There are eight million stories in the Naked City. This has been one of them.”