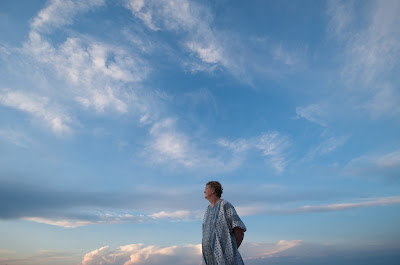 Someone was blogging about clothes recently, mainly about how white is doomed to be instantly covered with the first thing you try to eat. It stirred up the grey cells on a subject which I do not have to think about too much but affects me greatly in some ways.

On my recent holiday my intention was to wear as little as possible if anything at all, if you read the start of my Livejournal blog you will understand. I knew that we would not get to my favourite place so much this year. Julie does not like the summer heat on the beach or the longish walk to and from it so I got up at seven when the car would be available and wandered the shore line and swam for a couple of hours before most others had really got started for the day. One unexpected change was body density, as muscle turns to redistributed fat there seems to be a slight reduction in density and you float more like a cork. I was able to lie back close my eyes and float away. Less chance of drowning as nearly happened a few years ago so can’t be bad.

Before we left home I was reminded to pack my kaftan which I had bought for this trip, I don’t get to spend much on new clothing, often depend on Julie’s cast offs, Family beach visits are often when it is a bit too hot and some protection is wise for our northern skin. We had no sooner arrived in France when Julie waltzes out wearing said kaftan to great approval of the gathered crowd. This was a superb test of my new inner calmness, something new and something of a positive statement stolen from me,just a simple sack of cloth but it would have made a strong statement for me especially with a belted waist. Oh well. The tee shirt seen in my photo and a pair of light weight calico trousers to be a bit dressy was the limit of this seasons purchases. Normally I would not want white when traveling for the reason mentioned above but these were so light and comfortable. What I had completely failed to consider was how sheer they were and I had only packed a few pairs of black knickers, my sister in law did not seem in the least surprised at my request for the loan of some of her whites!

Half a life time ago I got a proposal to get married, we had been together for a couple of years but in her professional life at that time invitations did not include unmarried partners ( dark ages ). She did not tell me that this was a principle reason on her mind, she knew I disapproved of the concept but the tax breaks at the time would more than pay for my living costs! They have all been withdrawn now by a stupid government. Julie’s plan did not work out quite as she had hoped. I had not up till that time had to explain my extreme discomfort presenting in an overtly masculine mode. Unfortunately this is exactly the role which she had hoped for since in her eyes I had the figure for it if not the expected look.

Over the years I have suffered remorse for having denied her the chance to go to some really fancy events but in recent years have relented occasionally ignoring black tie demands and arriving in androgynous mode, unstructured cream suit, wild shirt without collar, feminine sandals, flowing hair and painted nails. It is the nearest I can get to her dream date and this week she has what may be the last invitation before retirement to a National Galleries event with special lenders meal after the official exhibition opening. My nails are their worst for years after heaving luggage about without considering my decrease in strength and ripping several down to the quick.

This could be an interesting evening out in Edinburgh where we don’t get to visit much these days. Perhaps I should mention it in a future blog.