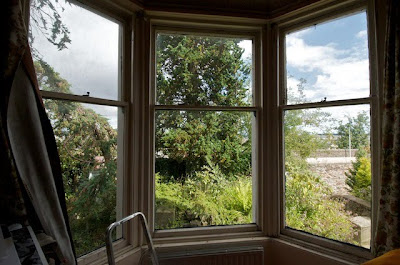 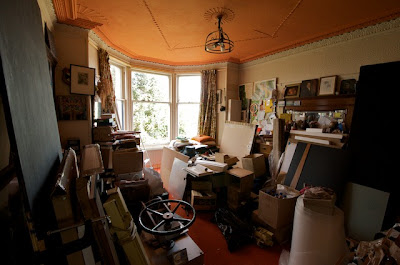 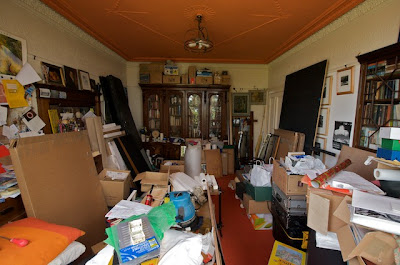 I have found a new room in the house! Twenty years ago it was abandoned as too expensive to repair and decorate!! I took it over as a studio space for when I needed to photograph artworks in controlled lighting, at that point the blinds were closed curtains drawn and extra blackout hung!!!

The phone stopped ringing several years ago when everyone bought a digital camera so the space became a magnet for every piece of junk imaginable,half should have gone straight out but that is not my decision to make so…

Yesterday I started to dig my way towards the window putting my back out and into spasm. Today with great care , for my back, I took down the blinds and let in the light. Quite a nice room with a bit of work, could not see it buy room lights which were so weak and got absorbed by the terra cotta ceiling colour, my lights were concentrated on the work and nothing else and usually in a black box!

The good news is that a cheque will arrive soon for £9000 /$14829, enough for a life changing holiday for two in sunny Thailand, the bad news is that the windows can no longer be kept weathertight and I have got fed up digging out rot and filling up the holes so the whole lot is going on replacing windows the result being that they will look exactly the same but they will work and for the rest of my life I do not have to ever bother with repairs. This is the third “summer” in a row where the wood has not dried out enough to work on them.

Truth be told given the choice and the money had to be spent on doctors bills I would spend it on what the world sees before bothering with the rest of the bits almost nobody will ever get to see but even that is probably too late so a set of double glazed windows it is then. We have agreed the price and all being well tomorrow they will be measured up exactly and the money will be gone sometime in September before the cold and damp weather arrives. I thought we had been saving this money for a new car to see us through the first ten years of retirement, I agreed to this at a time when my future was about a month ahead and that seemed to long. Never thought I would actually be here and spending it! Now you can see why I had to rediscover this room. Think it will be small enough to hide in for the coldest months to save on heating but some work to be done first.