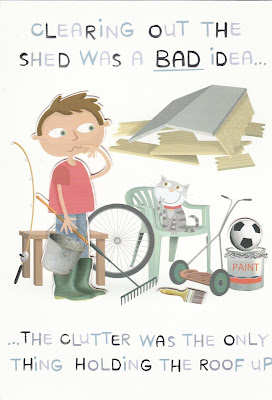 We ached from laughing after I received this card for my birthday!

Yes this has happened and yes it is happening to another shed in the vegetable garden but not so fast that it is a complete disaster but far enough gone to have to fall down before it can be fixed! Well isn’t it lucky I have a spare shed!! My friends know me well and I will scavenge their cast offs for use later on. Lucky I have friends who throw away stuff which is better than I can buy. I was cleaning up before the party and needed some encouragement in the form of a driving pop beat. Usually I leave a disc in the car player for months but my navigator finally forced me to eject a Madonna greatest hits disc, I had been listening to it on the iPod then the car but on the house system through the scavenged speakers wound up to “11”, that is 350 watts per channel I finally found out what it she really sounds like. Work done in double quick time!

Out there in the “good” shed I found what I was looking for, a perfect double sink and drainer which will fit better than what was there before and with a rounded corner is less likely to do us permanent harm. All we need to do is decide if a powered waste disposal machine is really necessary. No would be the best answer the I would not have to find a way to get power under the floor. Mind is buzzing with design options, starting to think of it less of a disaster and more of an opportunity. The archeology shows that this will be the third major sink development in this new extension to the house. The first would have been heavy ceramic sinks, like some I have in the garden as planters! And just reach my crotch (can I type that?), I would have had to kneel to use them! They lasted about 75 years before being replaced in the early 70’s by the unit which has just come out so I guess my replacement will be torn out in about 20 years from now. There is of course an empty space in the shed, I tried to collect the give away gas stove I was offered but it weighs a ton and will need two to move it, lost a fair bit of strength this last year, more than the literature says I think.

Last weeks book launch we went to was full of my old clients and everyone I spoke to asked what I was up to these days! Well not doing any work for ANY of them that’s for sure. It was good to talk to some of them who I had not met for a year or two in most cases. At least we got something out of the evening and have an invite out for a meal tonight with one I did not get a chance to talk to. Perhaps I will find out how he can afford to spend his retirement driving round in a Mercedes sports car, probably because I never charged enough!