It is a long time since I have had a spooky premonition but last night the wind was worrying me and felt sure that some tree was going to come down in the garden, I could hardly sleep for these thoughts racing through my head. Trees do not fall in the garden and the wind was nothing like what we often get so what was this nonsense all about, I slept fitfully then when the wind dropped at about 6 am I fell into a deep sleep only to find myself having what seemed to be a nightmare as Julie chatted just out of hearing on the phone, long before any hoped for waking time.

Soon it became obvious that this was a real nightmare and my favourite tree, a laburnum soon to have formed a cloud of yellow in the sky had been blown towards our neighbours house and he was none too pleased. After only three or four hours sleep I was in no fit state to do much about this but...

The whole country is in chaos once more, we are lucky to be one of the places not deep in snow once more. Help from insurance company? get your own tree surgeon and send us the paid invoice for reimbursement but they are all out working on trees.

Garden clothes feel a bit like drag even though they are my wife's cast offs but needs must. I started at eight something, too sleepy to notice exactly, and started to trim off the lighter branches which were still catching what breeze was left. Luckily the tree had hardly touched the house but landed on the garage roof after bringing down a large chunk of stone wall which probably softened the blow. It was eleven thirty before I was ordered in to get some breakfast!

Ten minutes later I am back out cursing my one broken nail and the ruination of a beautiful set of gold nails now chipped beyond redemption but the tree was nearly stable since there was no word back from all the woodworkers contacted. this was also the day my friend with a chainsaw was found to be away and another who would have helped for some cash in hand was getting his heart checked out in the hospital and I discovered that you can no longed rent a chainsaw because of elf and safety regulations! Laburnum I know from having had to remove this tree's mate many years ago is as tough as iron but I set too with a bow saw on the thicker sections till I had the over one foot diameter tree solid and resting on solid prop supports. I stopped when the saw and my arms would no longer work and went in for a well earned lunch brake just as the phone rang with someone saying they could come and assess the situation in ten to fifteen minutes, saved!

Once he knew the insurance was paying he cheered up and I think the price went up too. He did not seem too put off by the evident danger once the first cut was made releasing it's rest on the garage wall, he was more concerned by the wear on his chains this brute of a tree was going to cause. He said he too needed some lunch and more tools and would be back within the hour and true to his word there he was with a sweet petite woman as helper. In two hours he had earned his small fortune, I had a pile of logs for my friends woodburner and he had three blunt chains! 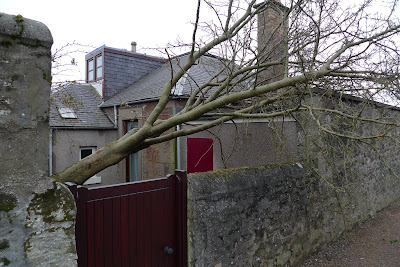 know this looks like I am just trying to keep up with Melissa but I am not! I could have done without this today and every muscle seems to ache. Our bath hardly ever gets used since we got a shower. for me it is just too short for comfort but today I plugged in the ipod and had a long soak with relaxing bath salts, may not have done if I had realised how difficult getting out is when the muscles are in this state.

A few tons of stone is now piled next to the logs at the side of the drive and someone is to come on tuesday to let us know what can be done. I don't much care so long as the neighbour is happy with what is suggested, I am going to plant a holly hedge to regain my privacy and they never seem to fall over. 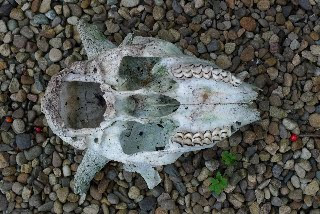