A while since my last post here though many of you will have found my T Central piece which Calie asked me to write, saves you wading through all those early posts!
Welcome to my two newest followers BTW.
Transition Thoughts & Reflections - Guest Post #7
As you can see it is part of a series showing the widely variable ways we deal with our problem, a fascinating series and well worth a visit.
The summer if that’s what you can call it is cold and wet this year, not all the time but the sunny spells hardly dry the place before some more rain. Watering the vegetables is easy this year and that is about all you can say in it’s favour. Between wet spells we have been harvesting red and black currants and gooseberries, most going into the freezer for a taste of summer later in the year.
Catching up on some socialising and trying to get some work done on the house and garden is taking up all our time at the moment. I will get a day off soon when I go for my next GID clinic appointment, in anticipation I went to organise blood tests so that I could take the results with me for discussion. My doctor is off on holiday with her children so finding out exactly which tests were required took a while and the receptionist took me through to the nurse station to try and get it sorted.We chatted about what it was for matter of factly and while the nurse was on the phone to the clinic I asked about changing my name on the records, more phone calls… They have always been reasonably friendly there but by the time I returned for the sample to be taken the next day there was a change. I think they have taken me on as their pet! They have become so much nicer! Concerned to get the correct pronunciation of my name and organising to phone to let me know when I can collect the results and so chatty! I had no idea you could talk about clothes and shoes on the national health system!
When I wrote my T Central piece I was told some were using photographs but not all. I thought two separated by forty years would be interesting but when Julie saw those which I had chosen I had to email and say a new choice would be sent once it had been approved. There are few enough of my early days, many purge their wardrobes I purged my early self portrait investigation into the strange creature I was. People have made careers out of such self examination! I had nudes studies which would have made it really popular! New pictures are hardly much more readily available so Julie decided to portraitalise me in the garden once my hair was washed. It is always interesting to see what you look like and a photograph is quite different from a long hard stare into a mirror. To do the occasion justice I was told to wear her best silk dress, a rare treat indeed then she took about a dozen shots. I used to cringe or hide from the front end of a camera lens but she captured someone totally relaxed and content with them self, I never thought I would ever feel this way in this lifetime.
A couple of days latter Julie returned from a day away on one of her projects and said she had a present for me. How on earth did she find the money for an ipad I wondered, no such luck but she had something equally intriguing. A box of hair collouring! Reality is most easily seen through a camera lens! She had finally seen that I was becoming a grey haired old lady and did not think it suited me. There was a pantomime applying the stuff but who is going to pass up a little personal attention? We have a long way to go before we get profficient at this but the first result was better than I could have hoped for, not something I thought I would do having once bought such a thing when the grey first appeared but threw it away. A number of girlfriends have hinted that I should do this, they all pay a fortune to have it done in a salon, I have done it on the cheap as usual. 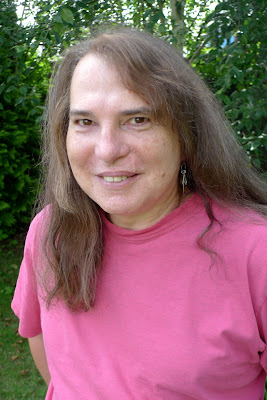