Dull pictures compared to those others have posted! 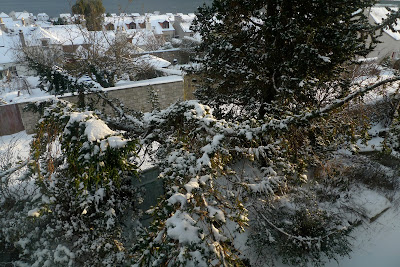 Just about the longest time between posts. It was getting a bit messy and depressing here with name calling and harassment going on in our usually quiet supportive corner of the net. Once I got into read and comment mode posting slipped out of my mind and I lost my thread!
My neighbour is almost back to his old self though gets a bit tired in the afternoons, they have been back round for a meal with us which gave me an hours exercise to dig out a safe path.
A few days vanished with another cold then the snow started to fall eleven days ago and has fallen everyday since. Nobody can ever remember anything like this before and certainly nobody has experienced thunder and lightning with snow round here before.
Our local taxes no longer get us road clearance even though the local health centre is on our street, we are category 4 which is as low as it is possible to be and a nuisance being on a hill with snow and ice right down to the edge of the main road, not an inch of braking zone to play with going down and no help with traction to get back so have not moved out of the garage since the 23rd of November and have no idea when we will ever move again.
Luckily I decided to make a supermarket trip that evening before the forecast snow “showers” and did a normal weeks shop. The first flakes were falling as we left the car-park, for once I decided to garage the car even though it was a little wet otherwise it would be lost under a frozen snow drift at the bottom of a slippy slope. We have a few shops in the small town where I live but when I went out to see if there were any basic supplies available yesterday the last delivery they had had was on the previous Saturday and many of the food shelves were bare and what was remaining took some imagination to transform into a meal. This evening at 9 pm. I made another trek to the shops with more success returning with eggs, milk, bread and even some vegetables and a bag of apples and most important a few heads of garlic! If we can stop inviting folk round to eat we are OK for perhaps four to five days.
We should not be grumbling about this small quantity of snow and the few inconveniences and only two power cuts compared to a friends experience he was telling us about just after my last post. He was in Antarctica making photographs when a storm started up so their group took shelter in a camp for 50 people and since there were only twenty odd in the group that seemed cosy enough. The storm grew to encompass the whole continent so more started to be drawn to the camp’s safety in what became a white out blizzard where you could not see a hand on an extended arm! Eventually there were over 200 in the tented camp waiting out the storm. After 17 days all the food ran out and they were without any food for the last four days before the storm broke. The last week or so had been our busiest scheduled week for six months and all has been cancelled, even medical appointments in the same street since the doctors can’t get here! I think of our friend and all is put into perspective.
The country has ground to a halt, most trains have stopped and the road bridge over the Firth of Forth has been closed to traffic for the first time ever because of snow, it was opened in the 60’s. Friends have reported seeing -17 C, 1.4 F though there have been some lower readings reported on the news. My first year in this country 40 years ago I saw about four flakes drift past  the window while I was recovering from an appendix operation and have survived most winters wearing sandals since. I have had to dig out boots, not as inelegant as they could be being Italian, which I used to walk the hills many decades ago just to be able be able to get over the mess created by the inept clearance attempts which have all been made to block any drainage when we finally get a thaw.
That should have just got posted but here I am a day later having like many others spent time digging out through the eight inches of snow. Once out many just slid into parked cars since they have no idea what to do on snow and ice many seem to thing that it has no effect on grip or braking at all! Food is slowly getting back into the shops but there is a limit to how much I will risk carrying in these conditions. The roadside salt bins being empty someone is making a killing selling bags of the stuff in carry-able portions, one in each hand aids grip but my the arms ache when you get home. I am hoping for an escape on Monday to get an electrolysis clear up session on lips and chin and round my hairy nipples, Ali says that I am now just a typical female customer! 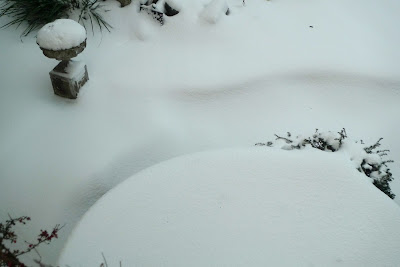