Darn chilly in the garden so here are some random thoughts.

Photos not long sucked into the mac so you will have to wait a while to see what we have been up to on our trip, have patience...
This is all back to front! We went on an early spring road trip to let Julie enjoy the cooler weather, her range before getting weary is greater in the cooler seasons. We hit an immediate heatwave in the south of England then once near the Mediterranean while it was briefly cooler than expected and while the rest of France dried to a crisp it soon warmed more than she had hoped for. Arriving home we find April and May have reversed this year and storms have ravaged the country, friends who were opening their garden for the “Gardens open” charity events for the last time, since age creeps on, were in the news instead with trees blown down! It looks sunny out there but the winds are blowing a cold chill round the garden, not my idea of fun.
I have always just worn any old rags discarded by others for garden work, my clothes were too delicate! Now I find myself grumbling that my wife's castoffs are not really feminine enough, no wonder she could not really see me as “not a guy” even wearing her own clothes!
The new life just fits so well I hardly think of it now until something brings me up short like my odd time in France or the occasional person who wants to talk about it, most seem to just accept. My sister had saved up a years worth of questions despite our long phone conversations. It seems I parried questions about my strange lifestyle and presentation, clothes , painted nails, long hair, hair removal and clothes etc with such casual and simple explanations that neither sister really suspected anything about my true nature. Once I finally found someone to live with they stopped questioning all together, probably with a sigh of relief. As we worked through her question you could see her reflecting on these past misinterpretations and the life I went through. Sad that we can miss a whole lifetime of living honestly with those family so close to us .
One of our stopovers was with a couple whose wife is a family doctor in a general practice where she had come across several patients like me but only in fairly recent times and she does not have too many years to retirement. Most had their lives quickly transformed once they asked for help but I was a little taken aback when she said that one patient in the practice had fully transitioned to female but after several years came back for help reversing the process. I have become so accustomed to the stories of lives saved by transition to hear of one who could get it so wrong "and" be somewhere in the health system as a psychiatrist now was disturbing. I know just how fundamental my identity is to my being. This is not like fancying a sports car and regretting the decision because it does not fit your lifestyle!
If I had been able to test drive the life I have now no matter how briefly, all those decades ago when I first discovered that in some places there really was help, I would have done everything possible to gain this life then.
Wisdom and regret of old age!
Posted by Caroline at 10:42 4 comments:

Is it just me or has everyone lost their followers on their blog?

Home at last. I would have stayed on the road until the money was all gone, I had got to that point but Julie had reached the opposite  conclusion and wanted home and NOW. This missed a few hoped for days with friends in the south of England but…
So much to do to get back into home life and the post trip dip to get over too.
Seven weeks away is quite a while and catching up on blogs has had it’s usual quota of misery while more than half of my blog list has now ground to a halt with blogs stopped, gone private with no way in or dormant for months. This corner of the net has not been the happy friendly place it used to be for a while now but it is feeling distinctly lonely here now!
I am still here and normal service resumes shortly.
Posted by Caroline at 13:32 13 comments:

A long rambling post after being away from net connections for what seems an age. 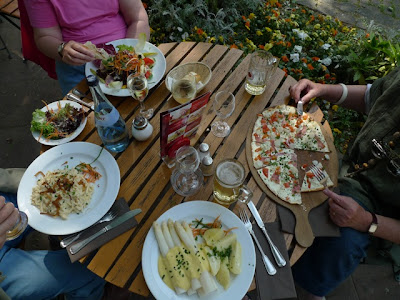 Perhaps the end of an era.

Strange day in paradise. Sorry no pictures.
With the weather so changeable trips to the beach have been few and short, Julie no longer enjoys the beach being unsteady on her feet and for many years has hated the struggle to get out of the sea if there is any kind of wave action. Today there was wave action! The day was sunny and warm with a light wind, hardly enough to excite the meeting of the Mondial de Vent just round the headland, an event in some world series of windsurfing and such like. Blocked that village for over a week. I wandered off by myself for a stroll along my favourite beach with perhaps a short dip in the water. What I encountered was waves breaking a hundred yards offshore a couple of metres high, I come from a mixed up units age! Not since the evening when I nearly drowned had I seen waves like these! Shoulder high waves crashed, just 20 feet away from where I stood, into a hollow and the wash was surging high onto the beach.
I wonder how many in the western world get more than a few steps away from their civilised comforts, sensual pleasures in a darkened room. To be a mile from your car and clothes, just a light rub of suncream your only link with modern life, wind and surf up to the neck invigorating the skin at one with the wild elements more than makes up for the sensations I do not seem made to enjoy. Sadly our time here is drawing to an end, not quite as pleasant weather as we might have hoped for and not as many trips out as we could have done in the past.
It takes a long time for me to get my ears accustomed to the French sounds and start to understand what is really going on. What this has done is confirm my suspicions that this is the one place where I am least accepted. Not by visitors but by some family! Not anti what is happening to me, not wishing that we were not here but constantly miss gendering and in French it is quite blatant. I had been asked not to be too pushy with my brother in law and he sees no difference in his mind and happily uses masculine terms in public which cut to the quick. My heart is heavy, not a term  really understood till now and my desire to return to this place, which for many years I have thought of as a second home, has diminished. They have had longer to get used to the new me than anyone and I have failed miserably to win them round. There are moments when you can see that they know that they should try but then when they are not concentrating it all breaks down…
***********************************************************
At that point I had run out of energy and so had the laptop battery and all shut down and went black, at bit since my mood has been in the days since I wrote that.
Tomorrow we leave here and head north towards friends in Germany. Normally I would be a touch tearful and sad leaving this place and friends behind. I shall be sad and tearful tomorrow too but this time because I now know that I do not know when I shall be able to return if ever. They have been very generous towards us and in many ways as friendly as can be but the truth is that I have failed to be really accepted for who I am now by the two people who most need to be onside here. All their friends and new people we meet have had no trouble or even question my past then the spell is broken by yet another stupid offhand remark. I have been down for a couple of weeks now and have done very little because of it surfing the emotions on the edge of tears.
Julie now knows that I cannot return without positive proof that they have come round, I cannot return after another year and allow myself to be outed like this all the time. I have no idea where I shall have evolved to in a years time but I fear they will be in exactly the same place.
A few hours on the road and I am sure the sick tearfulness will abate and I may even be able to start enjoying the trip again. This part is all down to Julie’s planning, mine was to get us here!
I doubt that I shall get much sympathy, this is after all the only setback I have really had to face but it feels as bad as a bereavement.
Posted by Caroline at 22:08 11 comments: