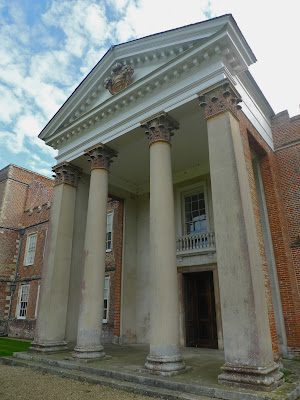 We are now half way through our family visit. For a while I was cursing having brought the laptop with me taking up luggage space and weight and the not getting email updates when we arrived and net contact vanishes without notice… Things we take for granted…
Why did we pack autumn clothes? All that weight and it just hangs on a rack while I live in a borrowed bikini. It is October so leaving sun hat and swimming costumes at home seemed sensible and must have saved nearly 300 grammes! As it has turned out the temperatures have been in the high twenties centigrade and until today had forgotten what a cloud looked like.
A neighbour back home wondered what on earth we were going to do being in the middle of nowhere without a car. Hardly had a moment to do the gardening which I said I would probably do. A trip was made high into the foothills of the Pyrenees to find wine for the family restaurant, we found a Dutchman, hair filled with crushed grapes, who was just starting to pick whilst the vendage down here near sea level is finished and folk are out trying to shoot the prolific numbers if Sanglier, a wild pig which thrive n these vineyards but if they are unlucky like one was it will find itself featuring on the menu here, this week it is as a pork pie! 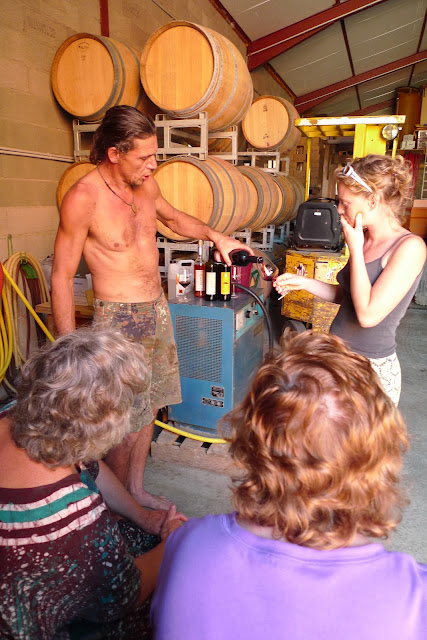 I had assumed that we would have missed the late summer treats like figs but a few had been saved for me, so high on the tree only I could get to them! Then we fond what must have been some of the last at one of the few remaining roadside stalls, half of the kilo bought did not make it home... Pomegranates straight out of the garden are something of a new treat and there are now some almonds, if I can avoid the bitter trees, and walnuts are about too.
Whenever we arrive my sister in law starts to get wanderlust so we relented and went with her to Cadaqués  in Spain to visit the home of Salvador Dali. 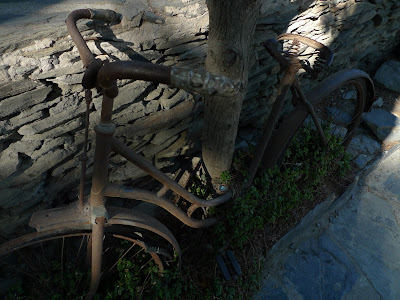 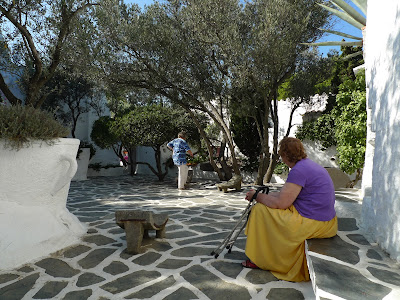 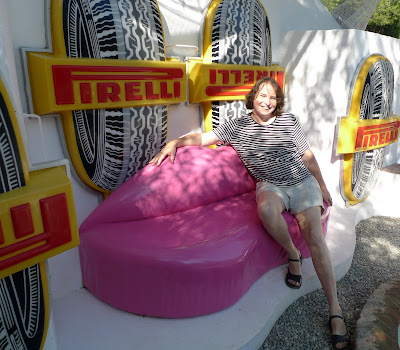 She chose a hotel near the shore in what was a quiet street when we arrived and even when we got back after a late evening meal, only then did bars and nightclubs open for Saturday night! Thankfully I had two ipods with me, you can never be too sure!, and at three I woke to such a noise I just drowned it out with some of my own! Spain has much more sheltered coastline than here in France and the multitude of small coves offer calm waters and easy access for Julie who is always a bit unsteady getting in and out. There were many such coves within the town foreshore itself. Warm evenings sitting at a beach front cafe with a drink and a selection of tapas while watching the sun set over the sea is hard to beat! On the way home we even found a near perfect beach if the shade of a tamarisk tree and a close by restaurant for a paella is what you are after… 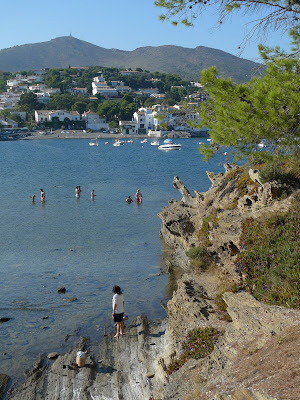 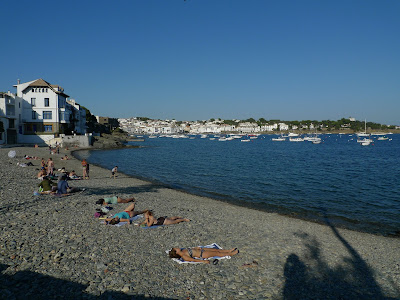 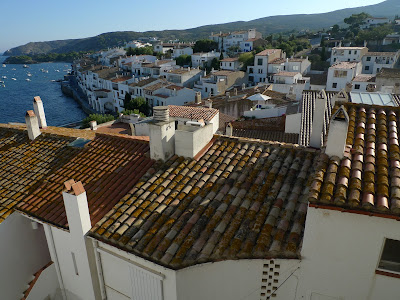 Over a week of daily sea bathing is not what I imagined from this trip but this should soon come to an end as cooler weather moves down from the north. Cooler will mean more easily getting on with small jobs about the place without getting exhausted! I have found a stash of old paint tins and have given up asking what I can paint, they have been very happy so far…
Looks like a chance for a little culture and a market day in Céret, the town where today’s snap on my picture blog, “voyageoftheeye” was taken last year.
When I left here in the early summer I was quite unhappy about how some of those close to me here seemed to feel, the jury is still out on that but though not perfect things do seem to have moved on as the reality sinks in. Some close family and friends do seem to find it hard to reprogram a lifetime of calling your name even if the evidence of their eyes is so absolute! Introductions as X who used to be Y is hard to stop too! Another week to work on that!