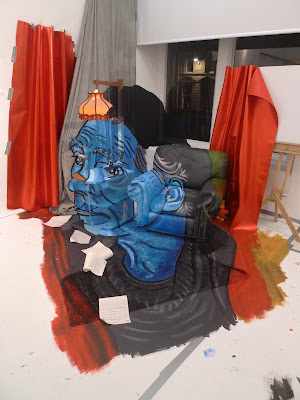 Well that's really great, I've just remembered voice-activated typing program and turned it on for the first time since I upgraded the operating system and would you believe it the first message says this program is not fully supported! Brilliant!
You must all think I've disappeared like so many others but I've been a little distracted for the last couple of months.
We had a fabulous time in France, three weeks of glorious weather, blue skies, above-average temperatures, and the sea was better than it has been all summer so got to swim almost every day. This wasn't quite the autumn break we had been expecting but we put up with it… We did manage some culture between some good food including at trip to Montpellier, our third visit over the years and we have still done nothing more than visit the Farbre art gallery and eat lunch each time at one of the open air restaurants in the park outside! 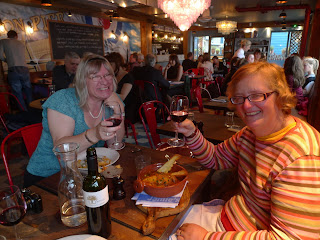 Sophie and her cat. 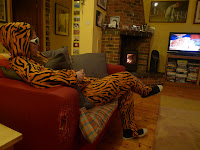 We also managed to visit the renovated Ashmolean Museum in Oxford and with Julie's magic parking badge were able to park right outside in a city where it's almost impossible to park anywhere. The place is an absolute treasure chest and you could spend months doing nothing but visit this one museum. 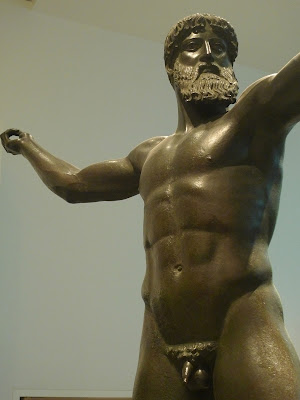 They had a quite good copy of this Greek sculpture which we had seen in Athens 30 years ago. I guess this is what they must have thought of as an ideal male body, I shudder to think that I was once grouped in with the likes of this... NO no no!
We have been trying to distract ourselves from the possibility of winter blues with a few local cultural visits and quite a few of the public lectures at the University. It takes our mind off the cold damp foggy weather. 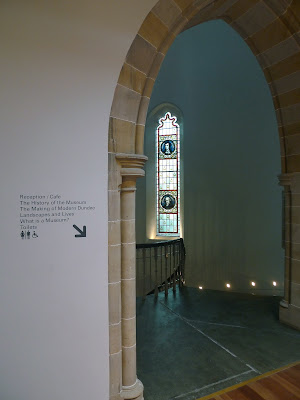 Only for the most adventurous
wheelchair users! 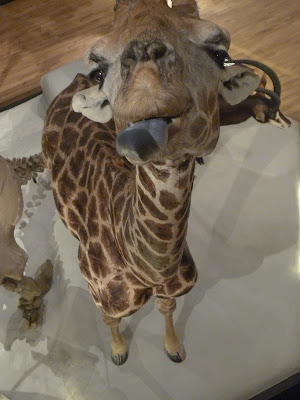 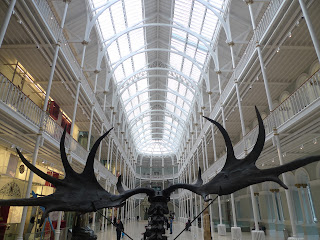 When I'm not trying to hibernate I have been indulging in an old hobby, having large toenails removed. 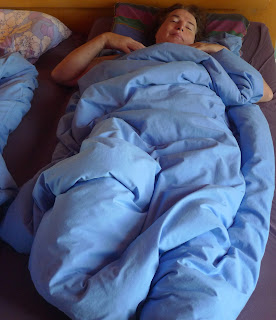 The price of having large feet is that the big toe sticks out and regularly gets something drop on it, both of them are now severely distorted and grow as thick as horn, so thick in fact the doctor hurt his wrist removing the first one, they take them off like we used to take the lid off a sardine can! This one is healing up quite nicely so with luck the second one to be removed on 19th. December will feel no worse than this on Christmas day when the house is full of friends who've come to lunch. I think this will be the first christmas not wearing my one good pair of shoes, scarlet patent leather pumps. This is all good practice for whenever I get to be a real patient sometime in the future. 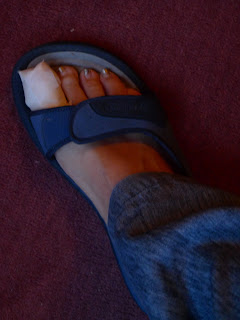 Our friend Louise came to visit us on Friday arriving in the most ghastly weather, dark gloomy and windy with driving rain. The reward for horrible journey was a complete change to bright and sunny with blue skies by the time she was ready to try us out for lunch at a fancy farm shop and restaurant in the country. It's getting on for two months since we last met in Perth and went shopping together. I've been living in what we bought almost constantly for the last month! Julie wore her purchases most of the time we were in France. This time we bought black pudding which we ate with sliced fried apples which Jenny gave us on our visit to Oxford.
It was lovely to meet Louise again though sad to see somebody having to suffer through the process which was my lot just 2 to 3 years ago. I now know that I could have already been through this long ago had I just stuck to the crazy system we have in the UK and which I have long disapproved of. Thankfully things are slowly improving and soon more will be allowed to start hormones before throwing themselves out into the world with no help as in the past.
My life is now settled and the once desperate need to read those exploits of others going through the same process for information and reassurance has faded away. So many of those whose blogs I did read have finished the process, had the surgery and started to get on with their lives leaving their blogs far behind. How the whole nature of how people write their blogs has changed in the short time I have been involved...
This week I had a quite a surprise whilst listening to the radio where the principal character had a name quite familiar to me, a male name once used to try and describe me. I didn't flinch, it was just another guy in a radio play, just another name, it was almost as if it had nothing to ever do with me…
Posted by Caroline at 23:31 5 comments:

They march to gather by the memorial where last year the 90 year old gates were stolen by scrap merchants.
The war to end all wars and create a land fit for heroes...
Posted by Caroline at 11:33 3 comments: