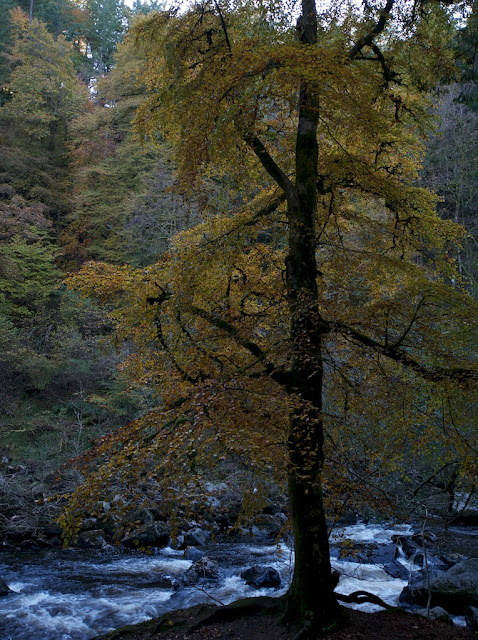 I usually don’t ask for anything for a christmas present, many reasons. As a child I hated presents, not just because of the poor taste of the present givers but mainly because there was no chance on earth that I could ever receive any present which I actually wanted… You should all be able to guess why.

It was not long before I worked out that christmas was all fairy tales, the tree bit was alright and I do enjoy decorating a tree each year as a form of artwork. Sometimes a dramatic real tree like the one I dug out of the garden a year or so back but it could just as easily be a scavenged artificial tree, This year I have a vision of a decorated tree without any “tree” since they are now so outrageously expensive. If this post reads badly it is because I am multi tasking as one half of my brain has taken on what I was going to say was a tricky project but suddenly ideas are drifting in… As for santa being born in a barn and that being special, I never went for that since being born in a barn round these parts in those days was probably fairly normal… By some quirk of fate my first real paying job was working for santa, a lecherous old guy who liked to cuddle his bunny girl helpers! They all got jobs doing almost nothing for the rest of the year in return!!

This year though I may ask for a present, I have been using my ancient wooden step ladder for quite a few jobs recently but few days ago found myself standing on the top platform whilst unhitching the side netting from my fruit cage and was having to stand on the top platform six feet off the ground because the step which I wanted to use was full of very neat holes, worm holes… Remembering to avoid that step on the way down gets tougher as you get older… Now I am regretting persuading Julie’s cousin not to give me her Rolls Royce standard high steps which she could no longer climb because I said that they should always be available if anyone came to do jobs in her flat with high ceilings.  Guess we will have to eat beans for a month to save up for my safety. 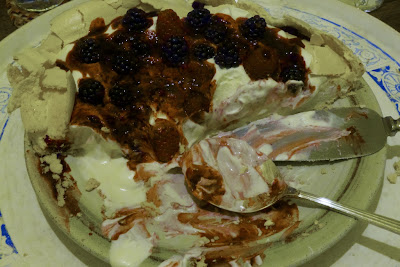 Frost has ruined the last of the bramble crop but not before we had a dinner party finished off with a bramble and raspberry pavlova with a bramble coulee, half devoured before I could grab a camera. Peanut butter has been declared a health food somewhere so after a few years resisting it is on the menu again, this time with bramble jelly, any tightening of the waist band is probably an illusion…

Soon any extra on the waist will be burned up trying to remain warm. The days are shortening and I have just been reminded that darker evenings start this weekend, long dark evenings to try and keep warm with ever increasing fuel prices. Doors are being closed as rooms get abandoned and chill until the spring while we inhabit only about half the house… I never imagined that I would be living in a Victorian freezer, always dreamed of building a super efficient home which captured the heat of winter sun. I often find myself sitting in the only sunny room to soak up the rays and read in comfort, in the bathroom! 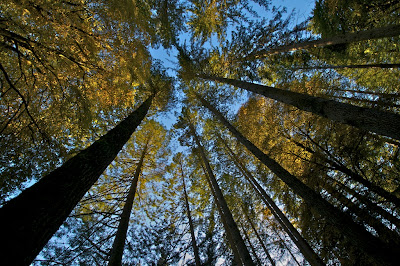 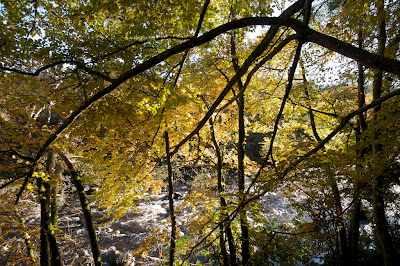 Several days since I started this post and we headed of to the hills on a bright sunny day with blue sky in search of some decent autumn colour which we found near the town of Dunkeld. Being cool Julie was able to walk a decent distance to the National Trust Hermitage falls. Sadly the recent gales had taken down quite a number of trees, some of the tallest in the country are found on this short walk. Later returning to Dunkeld for a warming coffee and cake and sitting at a window table we thought we saw tree seeds blowing in the wind, took a little while to work out that it was a few fluffy snow flakes. Before returning to the car we decided to check out the locally owned shops since I was in need of a house warming present in the near future. We were hardly in there for five minutes before outside turned into a full blown blizzard! 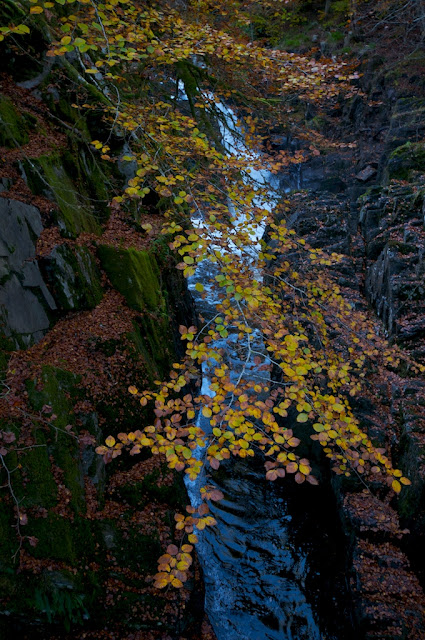 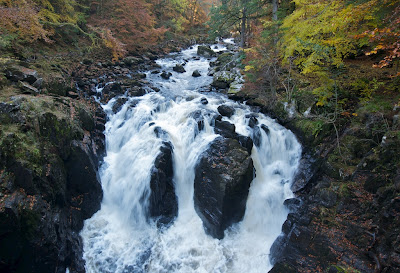 Taking the low road out of the blizzard took us away from our preferred rout through the hills but we made up for it but following the south side of the river where we have not been for quite a while. The reed beds came alive in the dying light. 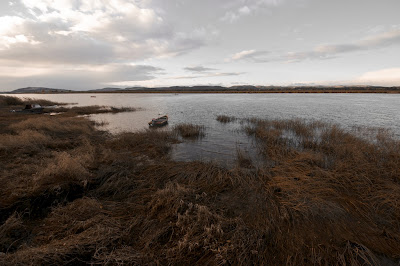 We had hardly reached the outskirts of out village when the snow caught up with us looking like tracer trails into the distance!

Lana Wachowski’s Remarkable Human Rights Campaign Visibility Award Speech: pLana Wachowski’s astonishing, warm, funny speech at a Human Rights Campaign dinner in San Francisco is the best thing I’ve seen in a long time, and I’m glad to see it get passed around so widely today: One of the things that’s so remarkable about Lana’s address—in addition to its artlessness, the result of her [...]/p
Posted by Caroline at 23:10 1 comment:

Intimacy, I peel off a few layers... 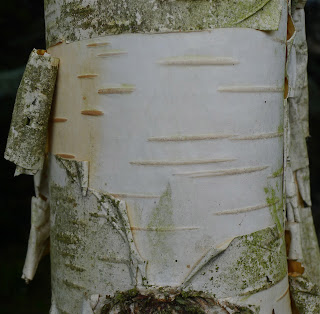 Today I had an assignation to get up close and personal, intimate even. I thought I had better make an effort and got scrubbed clean with a squirt of perfume even. Chose an outfit which would be easy to slip out of, then I got into a small panic when I wore my close reading glasses in front of the mirror and discovered a few hairs sprouting out here there and everywhere though especially round my nipples, not a good look when you are going to be this close to another woman… Out came the tweezers and I set to work, it has been some months since I looked this close and I never thought it possible that I would be this clear on my upper body mostly caused by the hormone change.

I thought that I might have felt a tingle of something slipping off my clothes to bee seen so up close by another woman and then have her hands on my body, firm and authoritative. I feel bad about being this intimate and though I gave her my name she never let on what hers was. After the firmness came some roughness though I had been warned that she might be, my earrings kept getting in the way! She had her way with me putting me into positions I had never dreamed of and then soon she was satisfied and it was all over, I could cover up again.

So that was my first time… I am still wondering why she asked if my bumps had been artificially enhanced! I know that they are quite pert and a real handful, perhaps it was because they were like that and I am so old…

So there you have it, my first mammogram, just now have to keep my fingers crossed that my new bumps are lump free, I hate waiting and it will be three weeks before they let me know.

Unusually for me I have been having a few thought about sex recently, those posts always get a few readers so I should get my thoughts sorted and give you all a proper thrill soon...
Posted by Caroline at 23:47 8 comments: 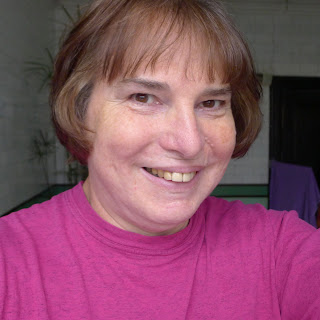 With the chaos of a week with a visitor the house lost it’s heartbeat for the first time in an age. There is a longcase clock at the bottom of the stairs sending it’s “tock  tic  tock  tic…” into every corner of the house then ringing a reminder of the hours. When Julie had a regular work schedule there was a fixed winding day but there has not been for several years now. What day of the week it is often has us thinking hard! I wind it whenever I think it needs it and check the height of the weights at random when passing. I heard one o’clock ring then some time later something felt strange…

There should have been two clocks tick-tocking a duet because Julie’s father bought a pair for two pounds from a sale room not long after the second world war when they first moved in here, her mother who was a modernist was horrified and only let him keep one...

Everyone here is in a whirl trying to get things done and enjoy a little sun and dry weather for the first time this “summer”, at least they were up to a few hours ago when the heavens opened and the streets are awash with rain water.

Julie has several projects which she has got herself involved with which is the reason that this post is not about the late summer sun in the south of France! Tomorrow she will be giving a public lecture about one of the projects and we have been kept busy photographing in a number of country mansion houses in the area. That part is always fun and is the only work in that line that I ever get these days unfortunately. All was going fine until the images were downloaded to the computer where the thing which I have dreaded ever since I got the camera had finally happened. I hardly ever change lenses and when I do it is with extreme care to reduce the chance of dirt getting on the sensor, for four years my obsession had meant that it had stayed clean. Imagine my horror at finding spots and black worms on the images which have taken countless hours of retouching because we have a reputation to uphold! If I had been messier in the past perhaps I would be better trained at retouching...

Weight is holding steady despite our socialising with our visitor and meals with friends whenever possible. 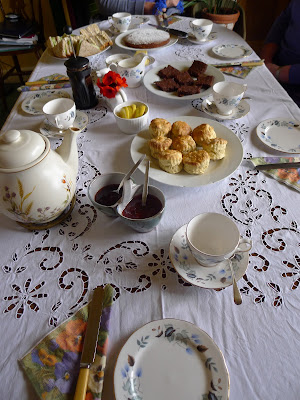 
I guess we are old fashioned in that we throw a dinner party at the slightest suggestion, we might be careful with what we buy but that just allows us to be more generous with friends… Not content with having them here we sometimes arrange to arrive, food ready, at a friend’s home when he is stranded at home with a puppy guide dog for the blind which comes with such a strict list of instructions for food , exercise and time without company that when his wife has to go on business trips he is a prisoner at the moment.It gives a chance to call up people we have not seen for an age with the added advantage that there is no washing up to do after! With the first days of autumn we even tried a picnic in the foothills of the highlands picking up a friend en route, the roads were almost completely empty except for us which is how I like it… We had company for our picnic. 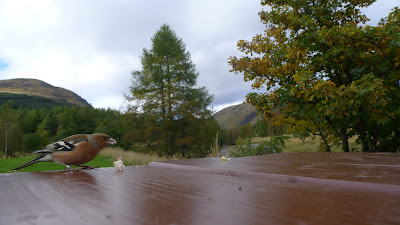 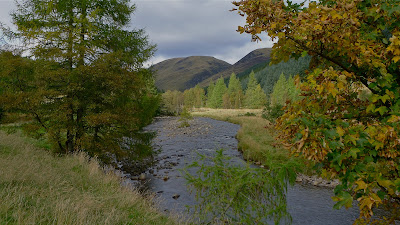