Why does pee smell funny?

Well this is different, I am sitting just outside the old chapel gallery where just three years ago many of my friends gathered for the opening of one of my exhibitions and I took advantage of the opportunity to set out for them what I was about to do…

We have been asked to watch over the gallery for the last hour today and it is anything but a hardship. The evening sun is still shining down the small gorge where the village is built into the steep rock walls and it snakes through never more than six houses wide, I see  every colour and shade of pan-tiled roof before me as I look out of the gorge to the lagoon which is between us and the popular spit of land with all the holiday development and my favourite beach. Naturally I rushed out without my camera!

We left home after handing the keys over to someone who will look after the house better than we do and the vegetable garden keys with a neighbour who is now going to share working it with me . As we moved south towards our first stop with one of my sisters near Oxford we passed slowly from winter with bare branches to finally in the last fifty miles fresh leaves and hawthorn blossoms, they said it was the first really spring like day. They had so far this year and though there was a record crop of dandelions everywhere the hoped for fresh asparagus which the area is famous for had jet to show a single spear… We have made up for it since we arrived here with a special asparagus pot for Julie’s sister, naturally our pee stinks! 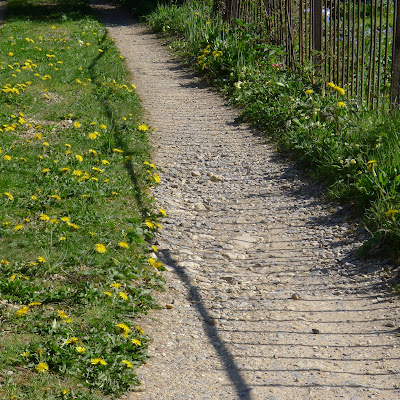 After a few days catching up with my sister and a few friends with a couple of days digging up hundreds of the before mentioned dandelions we caught an overnight ferry to Caen and headed for the Loire valley to visit Chateau  Chinon overlooking it’s unspoilt town, more than you can say for most of the chateau smashed up in fights between the French and the English. From there it was only a short journey to stay a couple of nights with one of Julie’s distant cousins from a branch of the family who moved to Paris several generations back, they have been in contact since they were children. She now lives in Poitiers in a medieval House just a hundred yards from the cathedral, we parked in the stable… They spoilt us. 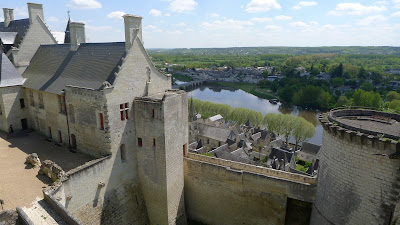 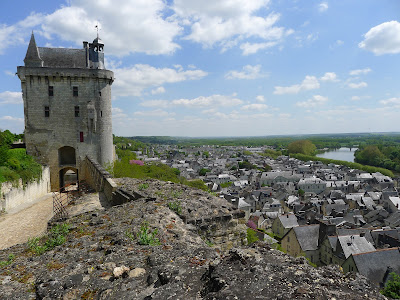 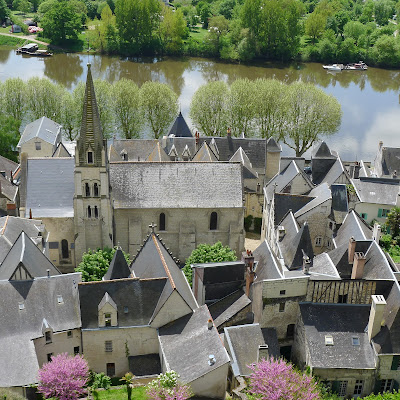 When we left for the south the country was celebrating their victory in the second world war, surely only Germany can do that! Every village on the way to Limoges had out the civic flags and there were gatherings round the war memorials for the obligatory speeches by the mayors. We were told that the roads would probably be empty, they were not, so many had taken the chance to add VE day to the religious holiday the day after and with a flexy friday with the weekend, voila a real holiday! 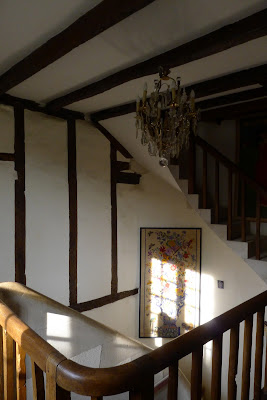 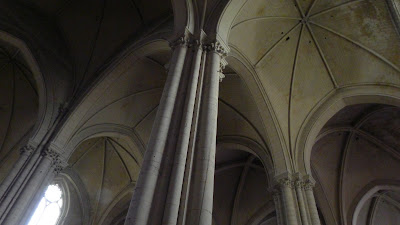 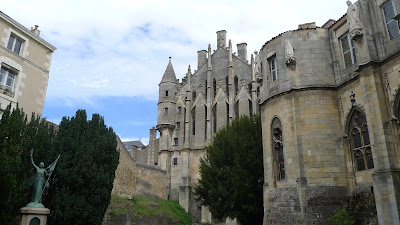 Spring is late here too and most of the asparagus is from Spain! The evening display of swifts swallowing mosquitos and swallows swiftly following them has just started. Shame that there are not more of them since they have bitten me a few times in the moments when the stronger than normal wind has briefly halted. They are sweeping past just feet in front of my lofty perch next to a lilac bush. The sun has left the gorge and the shadow is making it’s way up the opposite side from me, perfect timing to finish and go and find a nice restaurant meal then a wifi contact later.

This is hard but someone has to do it...