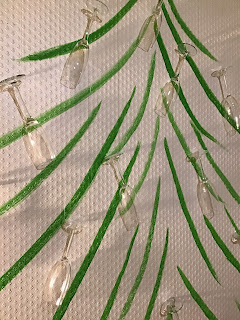 This is now the tenth anniversary of my voyage to the south coast clinic where the repairs and modification, which I was told fifty years ago would not be possible in my lifetime, were finally undertaken. That arrogant doctor was wrong…
Now how many readers are wondering where my winter tree decorating pictures are or asking themselves why there is not an annual marmalade making post about now. Well the marmalade is easy, with so much sugar cooked into it I may never taste that again, three remaining jars have been untouched for six months and many others have been distributed to friends still hooked on sugar. As for the tree…
The internet technology which saved my life and worked like a well oiled machine under my fingertips no longer works for me. Blogger has disabled functions of both my blogs for many years now and comments have long been impossible. I suspect never changing my original template may be part of the problem.
I only reluctantly came online originally to see if there was anybody else out there with similar problems to me, library searches had been useless for this sort of thing for many decades. Once I found that I was not alone after discovering “blog posts” I started to read everyone I could find. Guilt at just reading without commenting made me get my own blog identity and join the comments. Soon I felt that even not having written much more than occasional shopping lists since school many decades before, and being dyslexic when it came to spelling, I too should add something of my story and perspective. Once I got up the courage to set down my words it did become addictive. I found my daily thoughts started to form up like possible posts to my small band of fellow seekers of karma.
Being out of practice I find it difficult to put into words just how right this last decade has been and the wasted life before that just an occasional hazy memory. I wasted too much time getting up the courage to confront my doctor and as newbies together we struggled through the system whilst I spent all my savings on removing all the unwanted hair My savings ran out leaving just a few stragglers to be plucked occasionally as a reminder. When I finally agreed to a psychological assessment my initial meeting stretched right through the poor guys lunch break and ended with the offer of support to take my change as far as I would like to go. I am a little tearful remembering that twenty minute walk back to the café where I was to meet my partner, I was no longer shrinking my height as if that could hide my obvious differences, I strode through the winter sunshine vindicated and tall. I have never tried to hide since that walk.
According to a popular compendium of stories my allowed three score and ten years are up and I am now in bonus time. Ironically that time is being spent evading the sci-fi future I first dreamed of when reading Jules Verne as a nine year old with a new library card. Not all my own choice, even my mobile phone service has just been terminated. 2G phone with three month between charges is not modern enough. A simple OS update has wasted two days of my life, made my arm ache and still computer and emails do not work as well as they did fifteen years ago on what would now be a museum-piece computer. I am slipping further off grid all the time.
I have enough books, garden and tools to see me through another lifetime let alone the few years I may still have. And yes my new way of eating is going really well for anyone who read the previous post. Anyone on a similar journey, I really hope you too confront the obvious fears and find as much contentment as I have found.
I may report back on the twentieth anniversary of a wonderful transformation, do not wait up.
JUST REMEMBER THAT GOOGLE BROKE THE COMMENTS FUNCTION SEVERAL YEARS AGO!
.
Posted by Caroline at 00:00 No comments: